On May 15, 2017 Next Revelation Press, an imprint of US-Canadian-based publisher Tayen Lane, released the English version of Bought Journalists, under the title, Journalists for Hire: How the CIA Buys the News.

Tayen Lane has since removed any reference to the title from its website. Correspondingly Amazon.com indicates the title is “currently unavailable,” with opportunities to purchase from independent sellers offering used copies for no less than $1309.09.[note from OffG- we also checked on Amazon UK, as of January 7 2018 the book is unavailable there too]

The book’s subject matter and unexplained disappearance from the marketplace suggest how powerful forces are seeking to prevent its circulation.

Gekaufte Journalisten was almost completely ignored by mainstream German news media following its release in 2014. “No German mainstream journalist is allowed to report about [my] book,” Ulfkotte observed:

Otherwise he or she will be sacked. So we have a bestseller now that no German journalist is allowed to write or talk about.{1]

Along these lines, publication of the English translation was repeatedly delayed. When this author contacted Ulfkotte in early December 2015 to inquire on the book’s pending translation, he responded,

Please find the link to the English edition here http://www.tayenlane.com/bought-journalists

The above address, once providing the book’s description and anticipated publication date, now leads to an empty page.[2] Tayen Lane has not responded to emails or telephone calls requesting an explanation for the title’s disappearance.

When a book publisher determines that it has acquired a politically volatile or otherwise “troublesome” title it may embark on a process recognized in the industry as “privishing.” “Privishing is a portmanteau meaning to privately publish, as opposed to true publishing that is open to the public,” writes investigative journalist Gerald Colby.

It is usually employed in the following context: “We privished the book so that it sank without a trace.” The mechanism used is simple: cut off the book’s life-support system by reducing the initial print run so that the book “cannot price profitably according to any conceivable formula,” refuse to do reprints, drastically slash the book’s advertising budget, and all but cancel the promotional tour.”[3]

Privishing often takes place without the author knowing, simply because it involves breach of contract and potential liability.

Tayen Lane will likely not face any legal challenge in this instance, however. Ulfkotte died of a heart attack on January 13, 2017, at age 56.[4]

Udo Ulfkotte was a prominent European journalist, social scientist, and immigration reform activist. Upon writing Gekaufte Journalisten and becoming one of the most significant media industry and deep state whistleblowers in recent history, Ulfkotte complained of repeated home searches by German state police and expressed fear for his own life. He also admitted previous health complications stemming from witnessing a 1988 poisoned gas attack in Iraqi Kurdistan.

Ulfkotte’s testimony of how intelligence agencies figure centrally in Western journalism is especially compelling because he for many years functioned in the higher echelons of mainstream newsworkers.

The German journalist explains how he was recruited during the 1980s to work in espionage. This began through an invitation proffered by his graduate school advisor for an all-expense-paid trip to attend a two-week seminar on the Cold War conflict in Bonn.

After Ulfkotte obtained his doctorate he was given a job as a reporter at “the leading conservative German newspaper, the Frankfurter Allgemeine Zeitung, oddly appointed despite no journalistic training and hundreds of other applicants.

Serving as a correspondent throughout the Middle East, Ulfkotte eventually became acquainted with agents from the CIA, German intelligence agency Bundesnachrichtendienst (BND), Britain’s MI6, and Israel’s Mossad, all of whom valued his ability to travel freely in countries largely closed to the West.

His editors readily collaborated in such intelligence gathering operations,”[5] for which journalist possess “non-official cover” by virtue of their profession.

“Non-official cover” occurs when a journalist is essentially working for the CIA, but it’s not in an official capacity,” Ulfkotte explains.

This allows both parties to reap the rewards of the partnership, while at the same time giving both sides plausible deniability. The CIA will find young journalists and mentor them. Suddenly doors will open up, rewards will be given, and before you know it, you owe your entire career to them. That’s essentially how it works.[6]

He likewise ruefully admits to

publishing articles under my own name written by agents of the CIA and other intelligence services, especially the German secret service.[7]

Ulfkotte’s insider knowledge of the relationship between mainstream media and the intelligence community has special relevance in terms of informing the CIA’s antipathy toward Wikileaks, as well as the media campaign centering on the Trump administration’s alleged “ties to Russia,” while also lending credence to Trump’s frequent claims of the US media’s political biases and deep state ties. Indeed, Ulfkotte “Tweeted” about these very subjects just two days before he passed.

‘You Are Fake News!’: Trump and CNN’s Jim Acosta Get Into Shouting Match at Presser

With Trump looking to call on other reporters, Jim Acosta yelled out, “You are attacking our news organization, can you give us a chance to ask a question, sir?”

Ulfkotte’s explosive revelations still have the potential to further intensify the much-deserved scrutiny corporate news media presently face. In a society that pays more than lip service to freedom of thought and expression Journalists for Hire would be required reading for college students—and particularly those studying in journalism programs intending to seek employment in the media industries.

In fact, journalism professors, some of whom have migrated to the academy following long careers at renowned news outlets, possess similar insider knowledge of the relationships Ulfkotte readily explains. As both journalists and educators they have a twofold burden of responsibility. This is the case more so than ever because the entire professional and intellectual enterprise they are engaged in (and one directly linked to the nation’s accelerating civic deterioration) has been made a farce.

Journalists for Hire’s suppression suggests how Ulfkotte’s posthumous censors refuse for this important examination and cleansing to proceed.

UPDATE: We received this from a followers on Twitter. He ordered Journalists for Hire in January 2017, four months before it was due to be published. He never received a copy and was eventually informed that publication had been cancelled. He has copies of the notifications he received which show his order was cancelled in August 2017

The order was cancelled on 11th August. pic.twitter.com/HAbZPajlJU 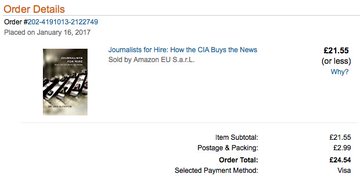 [3] Gerard Colby, “The Price of Liberty,” in Into the Buzzsaw: Leading Journalists Expose the Myth of a Free Press, Kristina Borjesson, ed., Amherst NY: Prometheus Books, 2002, 15-16.