The Enewetak Atoll, in the Marshall Islands, is about halfway between Australia and Hawaii. After WWII, the atoll came under control of the US, and in 1948 the first nuclear test was carried out. For 10 years, as part of the Cold War, 43 nuclear bombs were detonated on Enewetak – twice as many tests as its neighbour, Bikini Atoll.

The US sent around 4000 personnel to the area in 1977 to clean the site. During the three-year process, they mixed contaminated soil and debris with cement and buried it in one of the blast craters on the beach. The concrete dome was added and in 1980 the atoll was said to be safe for habitation. Local residents returned the same year. But the effect of rising sea levels due to climate change had not been anticipated. 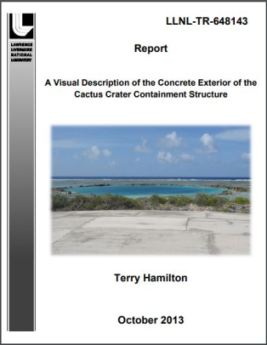 In 2013, Lawrence Livermore Laboratories issued a disturbing report commissioned by the US Department of Energy which examined the ‘Cactus’ dome on Runit Island, one of 40 islands of the Enewetak Atoll, recorded the cracks and ordered repairs.

It noted (p2) that “If the Cactus crater concrete containment structure on Runit Island were located in the United States proper (or subjected to U.S. regulatory authority), it would be formally classified as a Low-Level Radioactive Waste Disposal Site and be subject to stringent site management and monitoring practices”.

A reader sent a link to an article by Australian journalist Phoebe Loomes, who reports that rising sea levels have added to the degradation of the large, concrete-dome holding the toxic materials which are leaking into the Pacific Ocean.

Mike Willacy, an investigative journalist, travelled to the Marshall Islands for the ABC’s Foreign Correspondent program in 2017. He said that the dome was only meant to be a temporary solution until the US came up with a permanent plan – a cost-cutting exercise.

He saw the cracks in the concrete dome and was told that residents feared for their lives if the structure collapsed. They warned of the fallout that could arise from the water flowing into the Pacific Ocean.