Washington’s attempts to derail the Nord Stream 2 pipeline project to supply Russian natural gas to the European Union will definitely backfire, according to a geopolitical expert Dr. Pierre-Emmanuel Thomann.

“The more the US puts pressure on Europeans, the more there is a risk that Europeans try to detach themselves from the US and try to make a better deal with Russia,” Thomann, who heads Eurocontinent geopolitical research, told RT.

“We cannot abandon the import of Russian gas, this will be economic suicide. So the Americans also have a limit of their pressure capacity,” the analyst stressed. 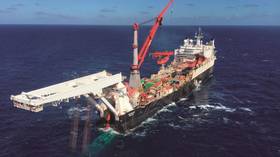 The comment comes as the US Ambassador to Germany Richard Grenell sent out warnings to German companies reminding them about significant sanctions they may face for participating in the building of the Nord Stream 2 pipeline with Russia.

Later, the US Embassy clarified that the letters were not a threat, but rather a statement of US policy. However, the clarification hasn’t stopped a number of German politicians from venting their anger.

“The matter of European energy policy must be decided in Europe, not in the US,” said German Foreign Minister Heiko Maas.

“The US ambassador seems to give the impression he is a viceroy of the Washington emperor,” top Left Party MP Fabio De Masi said, urging the White House to reprimand Grenell.

“The US ambassador using direct threats towards German companies is a new unacceptable strengthening of tone in the transatlantic relationship, which the Federal Government should protest against,” said the German foreign policy spokesman for the CDU/CSU Party Juergen Hardt.

Nord Stream 2, a joint venture of Russia’s Gazprom and five European energy majors, is currently one third complete. The €9.5 billion pipeline is projected to double capacity of Russia’s gas exports to Germany via the Baltic Sea, and is supposed to come into operation by the end of the current year.