The US President’s decision to recognize Venezuelan opposition figure Juan Guaido as the county’s “interim president” may set off a “possible civil war” in the oil-rich nation, WikiLeaks has warned.

Donald Trump’s move on recognizing Guaido as the “interim president” of Venezuela might prove disastrous for the country, which has endured years of instability, and spark an open full-blown conflict, the whistleblowing organization WikiLeaks tweeted. 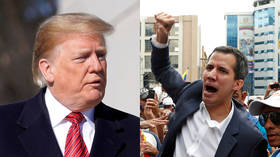 It could lead to a “possible civil war in the country with the largest proven oil reserves,” it said.

Earlier on Wednesday, Trump made a statement berating Nicolas Maduro’s government as an “illegitimate regime.”

“Today, I am officially recognizing the President of the Venezuelan National Assembly, Juan Guaido, as the Interim President of Venezuela,” he said.

Top US officials have thrown their weight behind Guaido over the past few weeks, openly expressing support to him and urging President Maduro to step down, while calling upon the Venezuelan military to support the efforts to restore “democracy” in the country.

The US-backed Guaido, who leads the anti-Maduro protests, has declared himself interim president.

Venezuela has been hit by economic and social crises over the past few years, worsened by a decline in oil prices and pressure from the US. While the Maduro’s opponents blame the situation on the allegedly incompetent actions of the socialist government, it claims that the discontent has been deliberately stirred up by the US and other foreign powers.