Senator Cory Booker (D-NJ) and the president of the pro-Israel lobbying group text each other “like teenagers” and talk about unifying the Senate against boycotting Israel, his leaked speech at an AIPAC meeting reveals.

Audio of the closed-door meeting was obtained and published by the Intercept on Saturday. Booker spoke before the members of the American Israel Public Affairs Committee (AIPAC) at the organization’s annual policy conference in Washington on Tuesday. 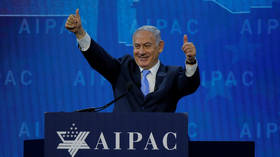 Booker was one of the few Democratic presidential hopefuls who appeared before AIPAC. Many skipped the event after Rep. Ilhan Omar (D-MN) stirred up the party with criticism of the lobby group’s influence in US politics.

The candidate thanked AIPAC President Mort Fridman for his “leadership and his friendship,” the audio reveals, and shared with participants details of their cozy relationship. Booker said they try to keep in touch and “text message back and forth like teenagers.”

He also voiced his strong rejection of anti-Semitism, saying it comes in different forms – particularly, the Boycott, Divestment and Sanctions (BDS) movement. BDS is a global movement focused on pressuring Israel to end its occupation of Palestinian territories and human rights violations. This pressure is unacceptable, Booker stated.

“Let me be clear. Anti-Semitism is un-American. It is anti-American. It violates, most deeply, our commonly held values, and we must take steps on the global stage against vicious acts that target hatred.”

“That is why I’m a co-sponsor of Senate Bill 720, the Israel Anti-Boycott Act, which opposes international efforts to encourage BDS while protecting First Amendment rights,” Booker added.

The controversial bill discourages US companies from joining any organizations involved in boycotting Israel. While it has received sizable support, human rights activists have raised concerns over the legislation, while others criticize it as an attempt by the Dems to win the pro-Israel lobby away from President Donald Trump.

Booker, however, stressed that bipartisan unity is important in supporting Israel. He also seemed to be offended by the remarks of Vice President Mike Pence,