Assange is facing extradition to the US, where he is wanted for allegedly facilitating the leak of confidential US documents by former US Army soldier Chelsea Manning. The US law frames his actions as a “conspiracy to commit computer intrusion” – a charge that carries a five-year maximum prison term and which Assange supporters call as an obvious pretext to get Assange in US custody and slap him with further indictments. 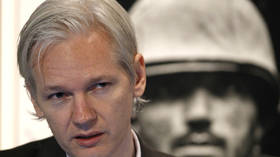 Less than a week after the Wikeleaks co-founder – who, love him or not, is the decade’s biggest publisher of whistleblower materials – was snatched from the Ecuadorian embassy by British police, the European parliament passed a new law that requires member states to adopt national legislation that would offer comprehensive protection for whistleblowers.

Only 10 EU nations, including the UK, have such laws in place now, the parliament’s website stressed. But with 591 MEPs voting ‘yay’ on Tuesday, that will soon change.

The proposed directive says “protection of whistleblowers as journalistic sources is crucial for safeguarding the ‘watchdog’ role of investigative journalism in democratic societies,” and requires that not only those exposing misdeeds of their employers, but also other individuals must be protected by the law from retaliation.

“Indirect retaliation also includes actions taken against facilitators or coworkers or relatives of the reporting person,” it says.

EU member states that are lacking in this department will have a two-year grace period to change their laws after EU ministers approve the new directive.

News of the arrest of Assange triggered criticism from a large number of activists, journalists, and politicians, who expressed fear not only over the fate of the WikiLeaks co-founder, but journalism itself.

If what he did becomes criminalized and he is jailed, “you’ll never be free again,” writer and former British MP George Galloway warned.