The White Helmets, a controversial Western-backed ‘civil defense’ group, is readying a new provocation that will see them using toxic agents on civilians to frame the attack on Damascus, Russia’s deputy UN ambassador has said.

“The pseudo-humanitarian personnel of the White Helmets continues to prepare ever new provocations in order to accuse the lawful authorities of using toxic agents,” Safronkov said. “We see what is going on.”

Safronkov said that despite the Syrian Army’s advances, Idlib remains a hotbed of terrorism. An Al-Qaeda offshoot in Syria, Hay’at Tahrir al-Sham – the rebranded Al-Nusra terrorist group – continues to carry out indiscriminate attacks on government-controlled areas, he added.

“They strike indiscriminately and that includes strikes on civil infrastructure, and the civilians are dying.”

Earlier, Maj. Gen. Viktor Kupchishin, head of the Russian Center for Reconciliation in Syria, claimed that foreign media appears to have filmed a staged killing of a Syrian family in a “chemical attack” that is to be blamed on Damascus. He said the filming took place in the Hama province, but has not provided any further details. 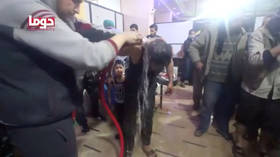 Moscow has repeatedly warned that militants have been plotting to stage a false-flag chemical attack in Syria with the help of foreign intelligence. Last month, the center reported that operatives from the secret services of Belgium and France were allegedly involved in preparations for such an attack along with the White Helmets.

While the White Helmets have received accolades and broad financial support in the West, including a recent US pledge to funnel $5 million to the organization, doubts have been cast on their credibility.

The group operates exclusively in jihadist-controlled areas and has been accused of having ties to terrorist groups and faking evidence of alleged chemical incidents.