Moscow may soon extend its fast-track naturalization procedure to all citizens of Ukraine, Vladimir Putin announced days after residents of the country’s east were allowed to get Russian passports within three months.

“We’re thinking on granting Russian citizenship to Ukrainians under a simplified procedure,” Vladimir Putin told reporters on the sidelines of the Belt and Road summit in Beijing. 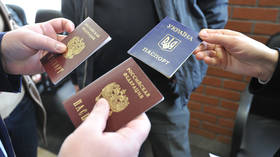 Russia has recently made it easier for residents of the breakaway Donetsk and Luhansk regions of eastern Ukraine to become Russian citizens. Expanding on that, Putin said the decision “wasn’t spontaneous.”

The government has calculated everything, including the number of potential applicants, the number of future retirees and, most importantly, the funding needed to implement the measure. Putin said the offer of passports would cost an estimated $1.5bn, but it will not affect benefits or other social responsibilities.

Unsurprisingly, the move drew criticism from Kiev and the West, but Moscow defended the proposal arguing it was not intended to provoke anyone. “The issue of passports is a humanitarian one,” Putin said this week.

Ethnic Russians and Russian-speaking Ukrainians who feel connected to Russia find themselves in a precarious situation. They have been stripped “of many things [including] fundamental human rights,” the president asserted.

Those coming from eastern Ukraine often have trouble in everyday life in Russia, be it enrolling at a university or simply booking a flight, Putin explained. Back at home, they have no adequate access to healthcare and social services as Kiev has essentially cut off the region from the rest of the country.