The Pentagon, whose military installations abroad dwarf those of China, is deeply worried about Beijing conspiring to build up such facilities across the world in order to protect the global One Belt, One Road project.

The Chinese military is hastily working to project power overseas, the US Department of Defense warned in a comprehensive report to Congress. Rising global ambitions have increasingly propelled China’s military “to think about how it will operate beyond China’s borders and its immediate periphery,” the paper alleges.

The People’s Liberation Army (PLA) currently has one overseas facility in Djibouti but Pentagon analysts believe they are eyeing others, possibly in Pakistan, the Middle East or Western Pacific. China’s projects such as the ‘One Belt, One Road’ (OBOR) “will probably drive military overseas basing through a perceived need to provide security for OBOR projects.” 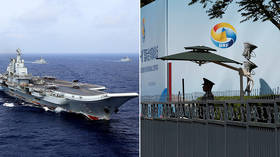 That aside, the report stoked fear of China using submarine patrols and developing an icebreaker fleet as a bulwark of spreading influence in the Arctic.

The US has the largest and the most powerful military in the world. It is estimated to have as many as 800 bases in more than 70 countries and territories, ranging from huge air bases in Europe to small radar facilities in the Pacific.

China, along with Russia, has been named one of America’s greatest military challenges. It’s unsurprising that the Pentagon’s report minced no words to blame Beijing for using “coercion” and employing “tactics short of armed conflict.”

Such activities “are calculated to fall below the threshold of provoking armed conflict with the United States, its allies and partners, or others in the Indo-Pacific region,” it claimed, habitually mentioning the rising tensions in the South and East China Seas as an example.

The document laments Chinese maritime and aircraft patrols in the contested waters, but again, the mention of Washington’s naval deployments in the area – seen as provocative in Beijing – is nowhere to be found.