The US has lifted sanctions from a former Venezuelan spy chief, who recently defected from President Nicolas Maduro’s side. US Vice President Mike Pence hopes this incentive will prompt others to defect as well.

Pence announced the decision to remove all sanctions from General Manuel Ricardo Cristopher Figuera, the former director general of Venezuela’s National Intelligence Service, at a conference in Washington on Tuesday.

Also on rt.com
Venezuelan ex-spy chief who defected to Guaido arrested on US drug trafficking warrant in Spain

Figuera broke ranks with Maduro in the wake of the failed coup attempt, which was orchestrated by a small group of soldiers last week. In a letter that had circulated on social media, the high-ranking general said he switched sides in order to “rebuild the country,” citing rampant corruption as one of the most glaring faults of the Maduro presidency.

Pence says he hopes that Figuera’s exoneration will trigger an exodus from the Venezuelan army ranks.

“As President Guaido builds a brighter future for Venezuela, we hope the action that our nation is taking today will encourage others to follow the example of General Cristopher Figuera and members of the military who’ve also stepped forward and taken a stand for the Bolivarian constitution and libertad,” he said. 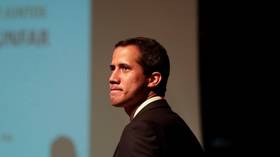 The US Treasury Department has confirmed the move. In a statement issued on Tuesday, it said that the US shows its goodwill by removing sanctions from designated persons “who take concrete and meaningful actions to restore democratic order” and “speak out against abuses committed by the ‘illegitimate’ Maduro regime.”

After the failed coup attempt, Washington seems to have reinvigorated its efforts to entice high-ranking officials to side with self-proclaimed ‘interim president’ Guaido, after he blamed the plotters’ defeat on a lack of manpower and allies at high levels of the Venezuelan government.

“We still need more soldiers, and maybe we need more officials of the regime to be willing to support it,” Guaido said,