The government in Kiev has agreed to the so-called ‘Steinmeier Formula,’ the process for Ukraine’s breakaway eastern regions to receive autonomy, which is expected to revitalize the stalled peace process.

Named after Frank-Walter Steinmeier, the German foreign minister who suggested it back in 2015, it’s an addition to the second Minsk agreement that explains exactly how elections must be held in eastern regions of Ukraine in order to end the bloodshed  and reintegrate  the breakaway Republics of Donetsk and Lugansk.

According to the formula, the “special status” – i.e. autonomy – law must enter into force temporarily on election day and become a permanent one after the Organization for Security and Cooperation in Europe (OSCE) deems the elections legitimate. 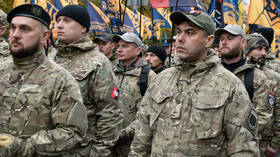 All members of the three-side contact group – Russia, Ukraine and the OSCE – as well as the ones from the self-proclaimed republics, agreed to the ‘Steinmeier Formula’ on Tuesday, sending letters of agreement to the OSCE special representative in Ukraine, Martin Sajdik.

The official confirmed to Interfax that no joint document was signed and “the signatories have been put under separate letters.” It was not immediately clear to what extent the ‘Formula’ has become legally binding, given this quite unusual way of approval.

Explaining the move, Ukraine’s President Volodymyr Zelensky said that the ‘Formula’ will be implemented into the new “special status” law – which is yet to be designed and approved by lawmakers at by the Ukrainian Rada. He also insisted that Kiev should control the border with Russia in the East.

The sides had been expected to sign ‘the formula’ a few week ago, but the negotiations fell through because Ukraine disagreed with some points. While the approval is regarded as a positive sing in peace process by politicians, it was met with a very angry reaction by Ukrainian neo-Nazis and pro-war groups. Shortly after the announcement, a protest dubbed ‘No to capitulation’, was staged outside his office. The protesters waved flags of far-right groups, shouted slogans and brandished flares, demonstrating their dissatisfaction with any attempts by the Kiev authorities to somehow settle the conflict in the east of the country.

A similar reaction was voiced by the former president of Ukraine,