NATO fans fears of the “resurgent” Russia and drags neutral countries into its orbit, but the fact is that Moscow’s military potential is only half the size of the bloc’s forces in Europe, Foreign Minister Sergey Lavrov said.

Although the European continent has already been “oversaturated with military facilities and weapons,” NATO is “continuing to merge with the European Union,” and has its sights on those EU nations that declared themselves neutral, Lavrov told Rossiyskaya Gazeta newspaper. 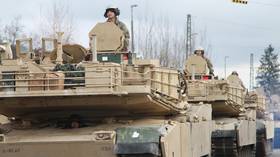 “NATO states are trying to conduct joint exercises, attracting neutral states, such as Finland and Sweden, under the pretext of [their] EU membership,” Russia’s chief diplomat explained.

One of such exercises is Defender Europe 2020, which will involve up to 20,000 US troops along with 37,000 soldiers from 18 countries. NATO claims the war games are not being aimed against any particular country, but the justification is far from convincing, Lavrov said.

We ask – who [do you intend] to defend yourselves against? They say it’s not Russia but other enemy whose military potential is comparable to that of NATO.

All in all, Moscow does understand there is “a small but very aggressive group of countries” in both NATO and the EU that “escalate historical phobias regarding Russia.”

Russia is definitely not the dominant military force in Europe. That is NATO.

Brussels strategists have also come up with a notion of “military Schengen” — which explicitly mirrors the free-movement area within the EU — which involves upgrading all transportation routes “so that any large-size military equipment could freely pass eastward.“

I think this [fact] alone is enough to understand the danger of such games.

Russia will, of course, push back against such pressure, but will do it “in such a way that this does not create unnecessary risks,” Lavrov stated.