Brother Jean from Belgium, working in the vegetable garden of the Monastery

In recent years, many people from Europe and elsewhere have come to visit us in the monastery in Syria,to see for themselves what is happening in Syria. They quickly understood that what the mainstream media writes about is usually the opposite of the truth. Nearly all testify that they cannot share this reality with their own family or closest circle of acquaintances because they are not believed. After all, the majority of people need a clear label. Which they get from the media. Even when they repeat the crudest lies over and over, they become the truth to the majority of people – including believers, ecclesiastical, and intellectual circles. Only a small minority, is able to distance themselves sufficiently from the hustle and bustle and appearance of this world, seem able to see through its outward trappings and deceit. They are then ridiculed by the majority and presented as being anti-social. In the depths of the Soviet times, some Russians knew that what Pravda (Truth -newspaper) continued to proclaim with great emphasis was a lie and what was repeatedly presented as a lie was actually their reality. Our mainstream media has now fallen to this level of what was then Pravda.

Helpers from France, Theofan , Belgium Mark and of course a Syrian, at the monastery, I know them all personally!

Whenever the Syrian army and its allies were able to free part of the Syrian people from the terrorists, our Western media reported a spectacular story of chemical attack, bombs, attacks on hospitals or torture carried out by the Syrian army. The vast majority of Syrian civilians saw that the crimes were planned or invented by the West itself to prevent further liberation of the country. Most of the others had no idea of ​​this. 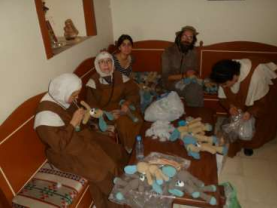 All the lovely sister making small rabbits to sell, for a bit of extra income for the surivival of the monastery and the people

The Belgium VRT news (and the Dutch NOS) has now been warning for weeks about so-called fake news about the covid-19. The simple and proven drug hydroxychloroquine would not be effective or even dangerous,