A further 11 current and former world leaders have joined an ever-growing list of politicians calling for an end to the political and legal persecution of journalist and Wikileaks founder Julian Assange.

Argentinian President Alberto Fernández and Venezuelan President Nicolas Maduro have added their names to an open letter to the UK government, calling for an end to Assange’s persecution.

The message has now been signed by 167 ministers, former heads of state and members of parliament. It is addressed to UK Prime Minister Boris Johnson and warns Britain against violating domestic, international and human rights law by extraditing the WikiLeaks founder to the United States.

Also on rt.com
Slavoj Zizek: The treatment of Assange is an assault on everyone’s personal freedoms

Lula, himself a former political prisoner, said that “If the democrats of the planet Earth, including all journalists, all lawyers, all unionists and all politicians have no courage to express themselves in defence of Assange, so that he is not extradited, it means we have a lot [of] democrats out there who are liars.” 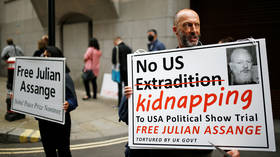 UK MP Kenneth MacAskill, a lawyer and former Justice Secretary of Scotland, described it as “a political crucifixion not legal process” that seeks “to bury truth and those exposing it.”

Rights groups including Amnesty International, the Council of Europe, The American Civil Liberties Union, Reporters Without Borders and Human Rights Watch have long advocated for amnesty for Assange, citing the dangerous precedent any extradition would set for journalists around the world.

Amnesty International’s petition calling for an end to the extradition hearings has garnered over 400,000 signatures. The group has also raised concerns that its international monitors are being blocked from observing the hearings.

The ‘Lawyers for Assange’ group originally published the open letter back in August but support has grown considerably in the interim as Assange’s extradition trial languishes in bureaucratic and judicial purgatory,