A man who had been ordered to self-isolate at a hotel in Auckland, New Zealand climbed down from his window using a rope made from bedsheets as part of a foiled escape attempt. Authorities are investigating the incident. 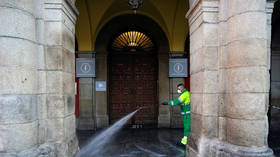 The individual, who had been deported from Australia, was holed up in Auckland’s Ramada Hotel for 12 days when he decided to make a break for it.

According to officials, a number of sheets tied together were found dangling from the man’s fourth-floor window, suggesting a Hollywood-esque strategy to flee the premises.

Despite his dramatic efforts, the individual was found at the front gate of the facility on Monday morning. He was taken into custody and is being questioned. Police are reviewing CCTV footage as they try to piece together the daring but unsuccessful escape.

Authorities said that the quarantine ‘guest’ had tested negative twice during his compelled stay at the hotel, and that he showed no signs of illness.

This isn’t the first time that someone has tried to flee government-imposed quarantine in New Zealand. In August, a woman was sentenced to two weeks in prison after she escaped an isolation facility.