Russia’s diplomatic mission in Madrid has scoffed at allegations that Russia was willing to send troops to aid Catalonia if it would become independent. Locals have mocked the alleged conspiracy with some jokes of their own. 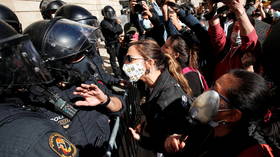 The bizarre accusation of plans for Kremlin military assistance emerged after a Barcelona judge, Joaquin Aguirre, claimed that there was a plot in 2017 involving an unnamed Russian group, which approached Catalonia’s independence supporters with an offer to mobilize 10,000 soldiers to back its potential secession from Spain.

Aguirre alleged that the aid was part of a Russian plan of “support” to former Catalan regional President Carles Puigdemont, and that the Kremlin even agreed to pay off Catalonia’s debts if the region declared independence. It is said that Puigdemont rejected the offer.

Police claim that the plot was uncovered after they found an audio recording on a phone belonging to one of 21 Catalan businessmen arrested on suspicion of misuse of public funds and money laundering.

Spanish media seized on the incendiary allegations, but it appears that Russia’s diplomatic mission in the country had a hard time taking the story seriously.

In a tweet, the Russian Embassy in Spain joked that the explosive accusations were “incomplete,” and that the Kremlin actually offered to send far more troops than initially reported.

“Two zeros should be added to the number of soldiers, as well as the most shocking fact of this conspiracy: The troops should have been transported by the planes ‘Fly’ and ‘Snub-nosed’ [two types of Soviet fighter jets used during the Spanish Civil War] assembled in Catalonia during the Civil War and hidden in a secure place of the Catalonian Cierra until they get a coded signal to act through these publications,” the diplomatic mission wrote.

The arrest of the Catalan businessmen and the subsequent probe into alleged Russian assistance into the failed independence bid sparked protests in Barcelona, with cheeky demonstrators carrying Russian flags and singing the Russian folk song ‘Kalinka’ to showcase their alleged ‘links’ to the Kremlin.

The Catalan parliament did in fact proclaim independence in 2017 following a referendum, a move which made the Spanish government temporarily block the region’s autonomy.