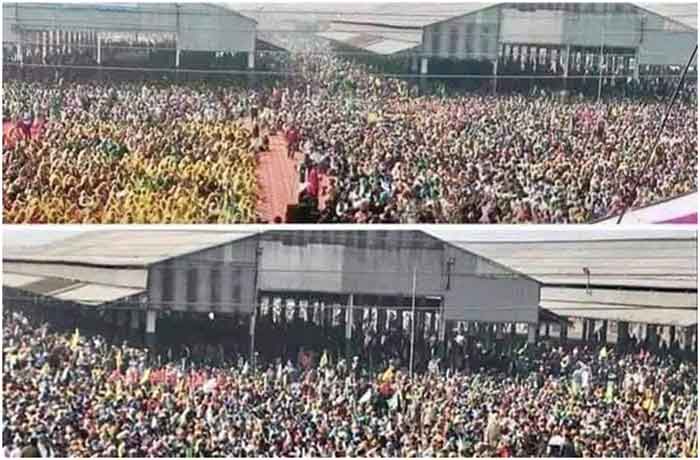 With the expansion of the movement through consolidation of democratic forces from other states to support the Peasant agitation the movement is on the verge of creating the impact of an inferno. The Punjabi peasantry have inspired the famers of other states, particularly Uttar  Pradesh and Haryana to join the ranks of the movement. We must salute the peasantry for so heroically withstanding the repression of the State which was unleashed at a crescendo.

The most significant development is the influence of the Bharatiya Kisan Union led by Rakesh Tikait who have staged mahapanachayats and are in the stage of sowing the seeds for many more.Tikait maybe belonging to the ruling class ranks but he is garnering forces at the optimum level to scrap the three agricultural bills and earn the Minimum support price. Even the most radical constituents within the United front have backed the Mahapanchayats.A mahapanchayat may not be a genuine revolutionary democratic organ being based on a traditional system but can still be a channel towards which struggles for revolutionary resistance could be developed. What is most progressive is that the movement is now taking an All India shape or character. Very pertinent that like the waves of an Ocean farmers are storming in from BJP Ruled states, creating base for polarisation of anti-Hindutva apolitics. The staging of the First Mahpanchayat in Punjab in Jagraon was of historic significance. Finally a great boost was given with even tribals joining the ranks a few days ago.

The Chakka Jam on February 6th had a most electrifying impact in igniting the spark of the agitation inspite of all the attempts to curb it by the rulers. The BJP was confronted in its very den .It spoke volumes of the death defying spirit of the agitating farmers.

Most heroically the democratic forces amongst farmers have ressurected themselves after the conspiracy of the BJP govt.in Delhi to sabotage the agitation. Notably the base has even been broadened with continuous re-inforcements of agitators and greater participation from neighbouring states. It is truly remarkable how they galvanised themselves to regroup and confront the forces of the state. A strong nucleus has been established which is strengthening to build the farmers resistance.

Heartening to see more and more sections from artists and sportsman support the movement in Punjab as well as Bollywood stars like Sonakshi Sinha and her father Shatrugan Sinha.Sadly the likes of Amitabh Bachan,Sachin Tendulkar or Akshay Kumar turned their backs completely.