Not content with months of worsening relations and the potential for military escalation, the European Parliament has now put forward a draft report insisting the EU needs to be more confrontational in its approach to Moscow.

A draft report published online by the assembly’s Committee on Foreign Affairs caused consternation in Russian media on Monday, after statements came to light that argued the bloc “should establish with the US a transatlantic alliance to defend democracy globally” and “deter Russia” from supposed aggression in Eastern Europe.

As part of its “vision” for future ties with Moscow, the paper concludes that the EU should put forward a number of incentives designed to persuade Russians that a turn to the West would be beneficial, including visa liberalization and “free trade investment.”

It adds that the bloc “should also convey the potential benefits that it is willing to offer in return for a democratic transformation of Russia,” effectively committing it to a strategy of regime change, without commenting on the popularity of its current government or the preferences of voters. 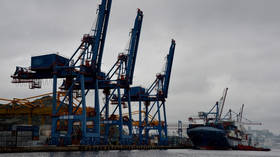 The document, on which MEPs had an opportunity to offer suggestions earlier this month, claimed that “the situation in Russia is deteriorating dreadfully because of President Putin’s systemic repression of democratic forces,” citing a large number of arrests at unauthorized protests held in January. It also explosively alleged that, in the lead up to parliamentary elections later this year, Putin is “waging a war against the people of Russia” that could worsen as the results come in.

A poll published on Tuesday found that the Russian leader has the support of around 56% of voters, while each of the potential opposition candidates polled in single figures.

One tool in the EU’s arsenal to target “Russian propaganda” and bring about the transition it wants to see would be, according to the report, “the establishment of a Free Russia Television with 24/7 airtime.” With declining audience figures for traditional media, quite why a conventional TV channel pushing out the EU’s talking points would change the landscape in Russia is unclear, given that other state-run broadcasters like America’s RFERL and Britain’s BBC offer similar services already.