Wall Street has been making huge investments — not in businesses or stocks, but in the American political process.

The Defender is experiencing censorship on many social channels. Be sure to stay in touch with the news that matters by subscribing to our top news of the day. It’s free.

Wall Street has been making huge investments — not in businesses or stocks, but in the American political process. At nearly $3 billion, the financial sector spent record sums on campaign contributions and lobbying during the 2019-2020 election cycle.

Wall Street has one goal: to maximize profits. By using wealth as leverage, Wall Street wields immense power over the electoral and legislative processes, to the detriment of ordinary people and American democracy. One part of the answer to this problem is pending legislation to reinvigorate the laws that underpin our self-governance.

The financial sector’s political spending skyrocketed by 50% between the 2015-2016 and 2019-2020 election cycles, culminating in $2.9 billion spent in the past year, according to a recently released report from Americans for Financial Reform. The highest spender on Wall Street, Blackstone CEO Steven Schwarzman, spent more than $33 million alone on campaign contributions during the last election cycle.

With individual donations and PAC contributions, corporations and Wall Street donate to win influence. It is also the third-highest industry spender on lobbying activities, with nearly $1 billion on lobbying in 2019-2020.

Wall Street’s political spending underscores the urgency to pass the “For the People Act,” legislation that would diminish Wall Street’s grip by matching donations up to $200 at a rate of 6:1 with public funds and enabling party committees to open small-dollar donation accounts with fewer restrictions. It would also increase restrictions on large PACs, like the ones used by financial sector tycoons. By empowering small-dollar donors and reining in billionaires, we can reduce Wall Street’s political influence.

For Wall Street, spending massive sums on lobbying and campaign contributions is a highly calculated decision. Wall Street wants to derail financial regulation and keep low tax rates. It needs friendly legislators to do it, and it has something they want: money.

During the past two decades, around 90% of House elections were won by the candidate in the race who spent the most money, “By and large the system functions or so I thought. But when I started scratching the surface of this case, That to me was profoundly shocking: to see how much dirt was coming to the surface”.

Djamila le Pair (on the right) at a demonstration in the Netherlands, June 12th 2021 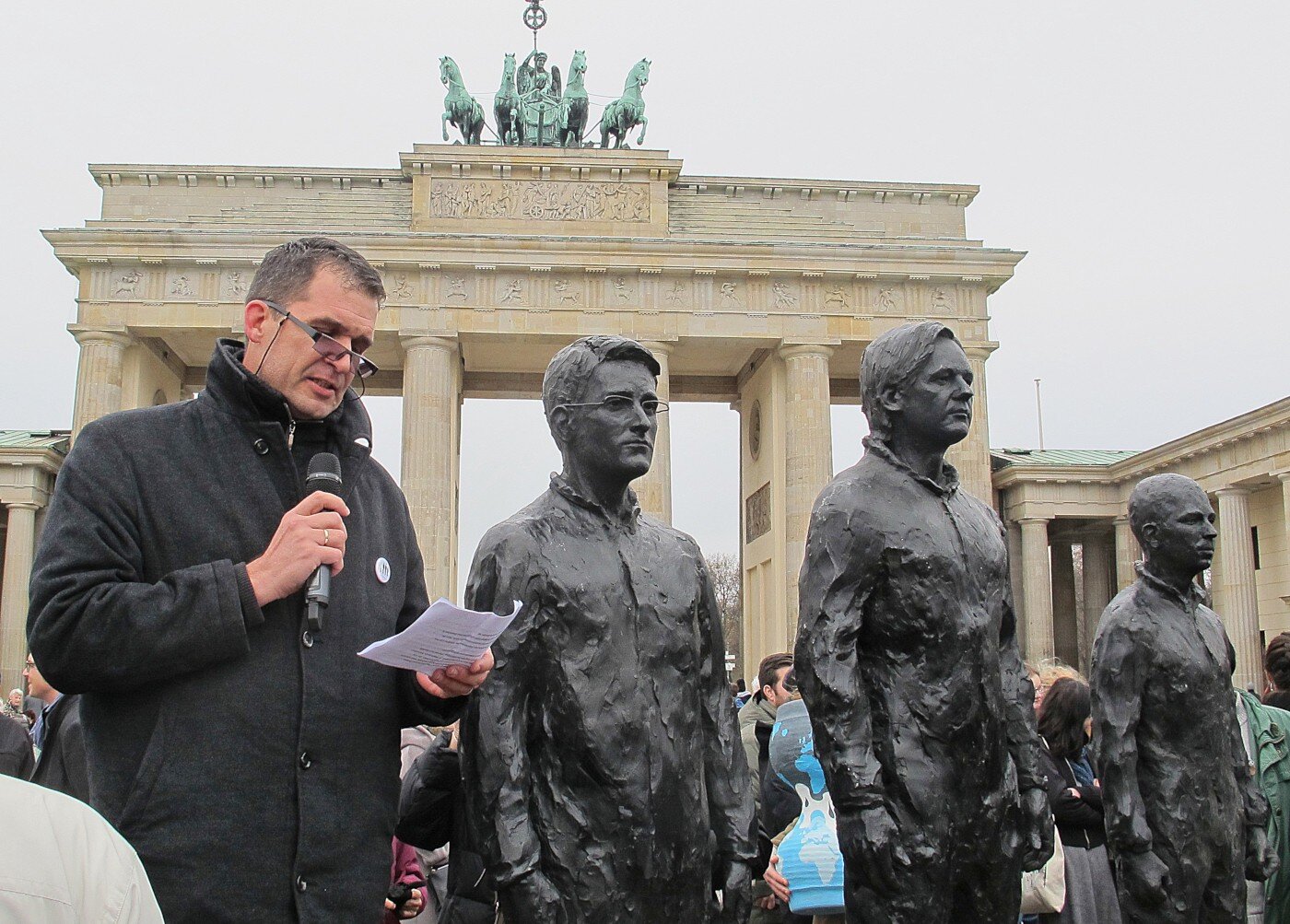 Nils Melzer November 27 2019 in Berlin, Germany with the ‘Anything to Say’ statue

When US vice president Kamala Harris visited Mexico, a demonstration took place in the Mexican capital on June 8 in front of the National Palace. During the protest, representatives of the #24F Coalición Vida y Libertad Julian Assange movement demanded the release of the journalist and WikiLeaks founder Julian Assange and spoke against his extradition to the United States and the police harassment against him. “Secrets, censorship and fear are tools used by tyrannies to control us because a well-informed population cannot be controlled. We are gathered here today to send our thoughts to the vice-president Kamala Harris and that she deliver these thoughts to US president Joe Biden. This country calls itself a defender of democracy but we now see this country attacking the principle of freedom of speech in their fight against Julian Assange,” said the demonstrators as quoted by the Mexican news channel La Jornada.

In a recent interview with The Guardian, Julian Assange’s fianceé Stella Morris claimed that the global reputation of the United Kingdom is being damaged as long as he remains locked up in a maximum security prison. She also expressed hope that continuing pressure from human rights organizations could cause the Biden administration to change its policy towards Julian Assange. The publication reiterates that the British judge rejected the arguments put by Assangeʼs lawyers about freedom of the press and also refused bail.

The French newspaper Le Monde published an article by Assange’s lawyer Eva Joly called “Julian Assange will die in prison for exposing war crimes”. In the article she comments on the lack of interest in Assange from the mainstream media and his deteriorating health as a result of being incarcerated. Assange, whom Le Monde in 2010 named ‘Person of the year’, remains in isolation in Britain’s high security Belmarsh prison, which is home to some of the worst criminals and terrorists and is often referred to as Britain’s Guantanamo. An international group of six dozen doctors have tried to draw attention to the deteriorating physical and mental health of Julian Assange while he remains in prison. They genuinely believe that he may “die in prison”. Despite all of this the silence from the world press on this matter continues, even though the very same global media wrote countless articles about the war crimes committed by the Western forces in Iraq and Afghanistan thanks to the documents provided by Assange and his team.

The Russian foreign minister Sergey Lavrov recently made a very important speech that, unsurprisingly, received very little attention from the western media. On June 9 Mr Lavrov addressed the Primakov Readings International Forum in Moscow. In his speech, Lavrov drew attention to what he persists in calling “our western colleagues” unwillingness to accept the “objective reality” of a peaceful movement to a polycentric world.

Instead, the collective West strove to ensure the continuation of their “privileged international opinion” at all costs. The West’s unpreparedness for “an honest, facts-based dialogue” was certain to undermine trust in the very idea of dialogue as a method of settling differences “and to erode the capabilities of diplomacy as a crucial foreign policy tool”.

The main mechanism used by the West in trying to establish its point of view was in its relentless promotion of what it is pleased to call “the rules-based world order”. That is a concept, Lavrov argued, that was “even more irrational and devoid of prospects”.

The West’s concept of the rules-based world order was to be contrasted with the United Nations Charter, itself also a body of rules, but one that has been universally accepted and coordinated by all members of the international community. It is the latter that is the foundation of international law. The West, by contrast, uses the term the “rules-based world order,” by which they have in mind something completely different. The West, by its use of the rules-based world order have in mind a totally different concept. The West by its terminology, has in mind that they want to develop West centric concepts and approaches “to be later palmed off as an ideal of multilateralism and the ultimate truth.”

These ideas of the rules based order are particularly marked in Europe, the United States and Australia.

By contrast, Russia is promoting its ideas in Eurasia. Lavrov drew attention to the fact that the values the Russians promote underlie the operation of a range of international organisations that have developed, especially over the past decade. These include the Commonwealth of Independent States, the Collective Security Treaty Organisation, the Eurasian Economic Union and the Shanghai Cooperation Organisation.

These organisations can all be characterised by being associations based exclusively on the principle of “voluntary participation,