Utility companies worldwide have benefited at customers’ expense with the deployment of “Smart” Meters – electric, gas, and water. Tens of millions have already been installed and millions more are planned despite all their problems – including fires, explosions, and serious cybersecurity risks (see 1, 2).

These meters DO NOT save meaningful amounts of energy and customer bills usually increase because of them (see 1, 2). “Smart” Meters collect customer usage data 24/7, whereas original 1-way transmitting analog meters DO NOT.

Utilities collect and analyze usage data in order to market more products and services to customers and/or sell data to 3rd parties. People worldwide don’t want these horrible devices on their homes and throughout their communities.

The critics of smart meters were right all along

Imagine that you do as the Government wants you to do and buy an electric car. Then you replace your dirty old gas boiler with an electric heat pump and install a smart meter. You think you have done your bit to help the environment.

So what is your reward? To have your electricity company use your smart meter to turn off your power because there is not enough juice in the grid. Suddenly, you find yourself sitting in a cold home and your plans to drive to Birmingham tomorrow are scuppered because your car won’t be fully-charged.

Smart meters have been sold to us as part of a green future where we can manage our homes via mobile phone, switching appliances on and off remotely so as to cut our bills. But it is the cynics, so often denounced in the past few years as paranoid and backward-thinking, who have worked out the real reason why electricity companies are so keen to install them in our homes: they want to ration our electricity.

An Oslo park bench bearing the name of Carl von Linne, an 18th century Swedish scientist known as “the prince of botanists” and the founder of modern taxonomy, could be removed after local politicians have deemed him to be racist.

The Old Oslo borough council is calling for the removal of the bench, which is located in the district’s Botanical Garden and has von Linne’s name inscribed on its back. The request – the latest in a wave of leftist attacks on historical figures – is expected to be sent to the University of Oslo’s Natural History Museum this week after being approved in a vote by the council last Thursday.

The local socialist and communist parties called for the proposal, saying that having a bench dedicated to von Linne creates an “unsafe” atmosphere in the Botanical Garden, according to Norwegian news outlet Khrono. The Socialist Party called the bench “very problematic.”

“There are people living in the vicinity of the Botanical Garden who find it hard that Linne is being celebrated in our part of the city,” the proposal said. 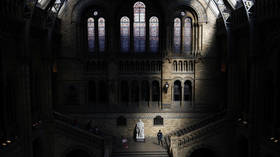 Von Linne, who died in 1778, is credited with creating the modern, two-tiered naming system for organisms and introducing Latin names for species – for instance, Felis catus for a domestic cat. Incidentally, he was the man who named the humans Homo sapiens. The Linnea flower was named after the scientist, and he was praised by such contemporaries as French philosopher Jean-Jacques Rousseau, who said he knew “no greater man on earth.”

However, von Linne also divided people into four color categories – black, red, white and yellow – and noted essential features in a hierarchy in which whites were at the top and blacks were at the bottom. In the view of Old Oslo council member Hasti Hamidi, a socialist, that made von Linne “the father of modern racism.”

Hamidi said “one can argue” that von Linne was an important botanist, but that contribution was no more important than his racism and its impact.

While the world’s attention is absorbed by tectonic shifts unfolding across America as “a perfect storm of civil war, and military coup threatens to undo both the elections and the very foundations of the republic itself, something very ominous has appeared “off of the radar” of most onlookers. This something is a financial collapse of the trans-Atlantic banks that threatens to unleash chaos upon the world. It is this collapse that underlies the desperate efforts being made by the neo-con drive for total war with Russia, China and other members of the growing Mutlipolar Alliance today.

In recent articles, I have mentioned that the Bank of England-led “solution” to this oncoming financial blowout of the $1.5 quadrillion derivatives bubble is being pushed under the cover of a “Great Global Reset” which is an ugly and desperate effort to use COVID-19 as a cover for the imposition of a new post-covid world order operating system. Since the new “rules” of this new system are very similar to the 1923 Bank of England “solution” to Germany’s economic chaos which eventually required a fascist governance mechanism to impose it onto the masses, I wish to take a deeper look at the causes and effects of Weimar Germany’s completely un-necessary collapse into hyperinflation and chaos during the period of 1919-1923.

In this essay, I will go further to examine how those same architects of hyperfinflation came close to establishing a global bankers’ dictatorship in 1933 and how that early attempt at a New World Order was fortunately derailed through a bold fight which has been written out of popular history books.

We will investigate in depth how a major war broke out within America led by anti-imperial patriots in opposition to the forces of Wall Street and London’s Deep State and we will examine how this clash of paradigms came to a head in 1943-1945.

This historical study is not being conducted for entertainment, nor should this be seen as a purely academic exercise, but is being created for the simple fact that the world is coming to a total systemic meltdown and unless certain suppressed facts of 20th century history are brought to light, then those forces who have destroyed our collective memory of what we once were will remain in the drivers seat as society is carried into a new age of fascism and world war.

The extradition trial of Julian Assange at the Old Bailey moved into a higher gear today.  Testimonies spanned the importance of classified information in war journalism, the teasing offer of a pardon for Assange by US President Donald Trump, torture inflicted by the US Central Intelligence Agency, the chilling effect of indictments under the Extradition Act and the legacy of the Collateral Murder video.

Investigative journalist Nicky Hager did some dusting and sprucing of the image of Assange via testimony given on videolink: not the “difficult, awful” individual discussed in standard media outlets, he asserted, but a figure “devoted” to “trying to make the world a better place in an era when there is declining freedom of information in most of the world.”  Hager found Assange “thoughtful, humorous and energetic.”

In his written testimony, Hager speaks to the role of journalism – the sort that matters, in any case – and war.  “It is in general impossible to research and write about war to a useful standard without access to sources that the authorities concerned regard as sensitive and out of bounds – and all the more so with the subject of war crimes.”  Classified information, notably in war, “is essential to allow journalism to perform its roles of informing the public, enabling democratic decision making and deterring wrongdoing.”

Hager managed to crowbar in a contemporary parallel on the importance of releasing the Collateral Murder, depicting the criminal slayings of civilians and journalists in New Baghdad.  The exposure of the incident, and the language used by the helicopter crew (“Look at those dead bastards”) contributed to “world opinion about the misuse of state power” in much the same way the video of George Floyd’s killing by Minneapolis police did to current debate.

The prosecution was in no mood for this more nuanced Assange, sensitive to caution and discretion.  For them, he remains a cold, calculating figure of dangerous idiosyncrasies, who endangered the lives of individuals by publishing unredacted documents.  Hager had understood that WikiLeaks only released the documents once the cables had already found their way onto platforms such as Cryptome, courtesy of the publication of the password to an unencrypted file in a book by Guardian journalists David Leigh an Luke Harding.

This unique drive for democracy against all odds succeeds to a great degree thanks to President Maduro, who relentlessly resists not only the attempts against his life, but the lies and vilifications about Venezuela from most of the western world, led, of course, by the United States, followed closely by the European Union which, it seems, dominated by NATO, can’t break loose from being at Washington’s bidding.

It is sad to see European states – hands and minds still dripping of colonial blood, not being able to break the stranglehold of their genocidal past – and step onto a new plate, into a new history – fighting for justice and human rights. An example how far from this eye-opening conscientious awakening Europe is, was again demonstrated today by the EU Commission’s call to “sanction” Russia for the totally unproven Navalny poisoning, by stopping the almost completed Nord Stream 2 German-Russian gas pipeline project.

Never mind the absurdity, that Germany and the EU are punishing themselves, not only because alternative badly needed gas supplies will be considerably more expensive – and god forbid – may be coming from US fracking sources. In other words, the EU would approve of an environmental disaster. Many of EU member countries are by their Constitution barred from using fracking gas or oil.

And again, the EU vassalhood – to call it what it is – refused President Maduro’s invitation to observe the December 6 elections. Mr. Maduro went out of his way to invite all the important opinion makers to come and observe the fairness of the elections, including the UN and the Europeans. The latter prefer not to see the correctness with their own eyes, but being able to criticize what they have not seen. There is no darker blindness than that emanating from not wanting to see.

And that of course only, because the European leaders (sic) – all shoe-ins by an international deep state elite – will do whatever it takes to preserve as long as possible the unsustainable – an unfettered, neoliberal no holds barred capitalism. The WEF (World Economic Forum) calls it best: The Great Reset – the upwards reorganization of assets. After the very elite-made global covid hoax has destroyed and continues to devastate most of what was the world economy,