Syrian and Russian troops have resumed their strikes against jihadist groups in Idlieb (Syria).

In response, Al Qaeda assembled under its umbrella five distinct groups known as Fathboutou (“Be firm”). They have a contingent of 30,000 fighters; receive funding and weapons from NATO; and have appointed a joint command structure, as follows:

In their communications with the West, the above groups only refer to their “revolutionary struggle” against the Syrian, Russian and Iranian “regimes”. When it comes to the Arab world, they only speak of the “Islamic Nation”, of “jihad against infidels” and of the “sharia”.

On 22 December, SAA air defenses responded to missiles fired by Israel in the area of Damascus countryside. This coordinated attempt in the ongoing plot of a final solution against the Syrian Arab Republic is likely a perverse celebration of the Trump regime signing of the new ‘defense’ bill, which includes the criminal Caesar legislation.

Israel and al Qaeda have a long history of war crimes against Syria. In May 2013, Israel bombed a food supply center for the SAA, a Syrian Arab Army air defense unit, and an SAA weapons and munitions depot — while al Qaeda blasphemed and videoed the Kodak moment with expensive cameras.

In early 2017, Israeli media bragged about providing state of the art trauma care to injured members of al Qaeda, on the Syrian Golan occupied by Israel, and bringing others into Israeli hospitals, for extended free medical care. 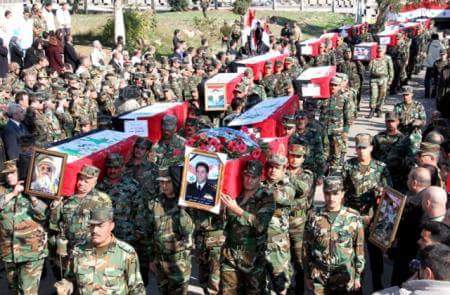 The Trump regime continued as ISIS’ second air force, beginning 7 April 2017, when he bombed Ash Sha’irat Airbase based on al Qaeda news on Khan Sheikhoun, much of which was provided by an illegal Brit whose medical license was permanently revoked in his homeland, via fake news! CNN. 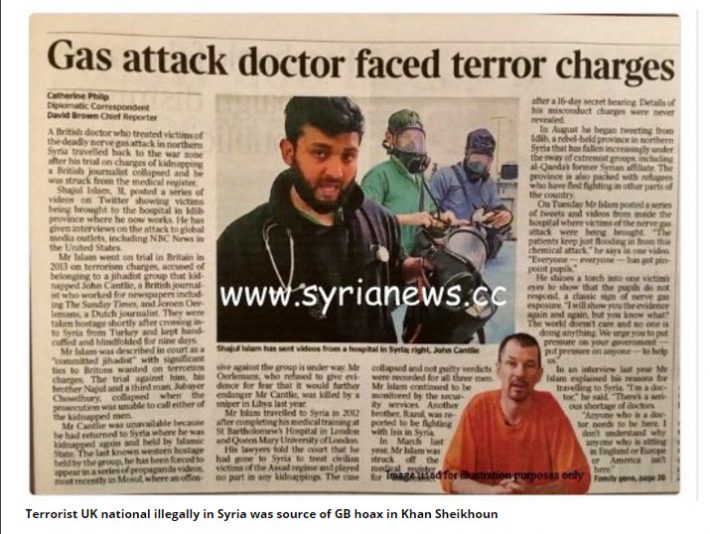 Over 100 civilians were hospitalized, including dozens of women and children, after anti-Assad militants unleashed a wave of mortars filled with poison gas on government controlled Aleppo Saturday evening.

Syrian state-run SANA published multiple photos and video of victims in the city’s hospitals being treated for what’s reported to be chlorine gas exposure. Though it’s not the first time that ‘rebels’ seeking to topple the Assad government have conducted a chemical attack on pro-government areas according to United Nations findings, it is the first time that mainstream American outlets like CNN and Reuters have featured coverage of such events.

Crucially, pro-rebel media has now confirmed the poison gas attack, specially the Syrian Observatory for Human Rights (SOHR), which western media have long relied upon as a go-to source of anti-Assad opposition reporting. According to Reuters:

In Aleppo city which the government controls, the shells had spread a strong stench and caused breathing problems, the Syrian Observatory for Human Rights also said.

Initially the death toll approached 12 according to early reports, however, it now appears there were no fatalities resulting from gas exposure, though many remain in the hospital in what international reports say is the highest casualty toll since the Syrian Army liberated Aleppo two years ago.

Dozens of civilians and children suffocated and were taken to nearby hospitals.

Where is the international outrage? Or is the world only provoked by fake “regime chemical attacks”? pic.twitter.com/c6UZhcpOzc

There is No FSA, There is Only Al-Qaeda

A brief overview of collaboration between the US-backed Free Syrian Army and al-Qaeda-affiliated Nusra Front.
Among Syria commentators in the West, both left and mainstream, it is commonly claimed that the Syrian government led by Bashar al-Assad has attempted to crush the supposedly moderate, secular rebels of the Western-backed Free Syrian Army (FSA), while at the same time deliberately supporting extremist rebel groups in order to “Islamize” the Syrian rebellion and to convince the West the Syrian government is really fighting terrorism. It is argued that if Assad could claim his government was fighting al-Qaeda terrorists, rather than secular freedom fighters struggling for democracy, this would force the US and other Western powers to end their support for the Syrian rebels trying to topple the Syrian government, and to instead embrace Assad as a partner with the West in the so-called War on Terror.
– Advertisement –

A closer review of events in Syria shows the opposite, however, namely that it is the US-backed FSA-branded Syrian rebel groups that have consistently collaborated with and fought alongside al-Qaeda’s Syrian affiliate, the Nusra Front, as well as alongside other Salafi-Jihadi rebel groups, namely Ahrar al-Sham and Jaish al-Islam, and at times even alongside the Islamic State (ISIS).
Nusra and FSA-affiliated brigades have essentially functioned as a coalition in the fight against the Syrian government, with FSA commanders often referring to fighters from Nusra as members of the FSA itself. In many cases, FSA offensives against Syrian government military bases or check points have begun with suicide or truck bombings carried out by Nusra militants. Nusra and FSA-affiliated brigades have established joint committees to divide weapons captured from the Syrian army in rebel offensives. FSA commanders often sell US and Gulf-supplied weapons to Nusra.
Certain FSA brigades and Nusra have of coursed clashed at times, however, there is a clear pattern of FSA collaboration with Nusra generally. FSA and Nusra militants have fought side by side in key battles in which the Syrian opposition has been able to capture large population centers and territory from the Syrian government.  » Lees verder

Note to readers: please click the share buttons above. Forward this article to your email lists. Crosspost on your blog site, internet forums. etc.

Last week, I urged the Secretary of State and National Security Advisor to stop protecting al-Qaeda in Syria by demanding that the Syrian government leave Idlib under al-Qaeda control. While it may seem hard to believe that the US government is helping al-Qaeda in Syria, it’s not as strange as it may seem: our interventionist foreign policy increasingly requires Washington to partner up with “bad guys” in pursuit of its dangerous and aggressive foreign policy goals.

Does the Trump Administration actually support al-Qaeda and ISIS? Of course not. But the “experts” who run Trump’s foreign policy have determined that a de facto alliance with these two extremist groups is for the time being necessary to facilitate the more long-term goals in the Middle East. And what are those goals? Regime change for Iran.

Let’s have a look at the areas where the US is turning a blind eye to al-Qaeda and ISIS.

First, Idlib. As I mentioned last week, President Trump’s own Special Envoy to fight ISIS said just last year that “Idlib Province is the largest Al Qaeda safe haven since 9/11.” So why do so many US officials – including President Trump himself – keep warning the Syrian government not to re-take its own territory from al-Qaeda control? Wouldn’t they be doing us a favor by ridding the area of al-Qaeda? Well, if Idlib is re-taken by Assad, it all but ends the neocon (and Saudi and Israeli) dream of “regime change” for Syria and a black eye to Syria’s ally, Iran.

Second, one of the last groups of ISIS fighters in Syria are around the Al-Tanf US military base which has operated illegally in northeastern Syria for the past two years. Last week, according to press reports, the Russians warned the US military in the region that it was about to launch an assault on ISIS fighters around the US base. The US responded by sending in 100 more US Marines and conducting a live-fire exercise as a warning. President Trump recently reversed himself (again) and announced that the US would remain at Al-Tanf “indefinitely.” Why?