The Australian government has been implored to urgently intervene in Julian Assange’s extradition plight and to bring its citizen home, by a senator who warned that the WikiLeaks founder faces death in a US prison.

Assange is currently in jail in the UK and fighting extradition from there to the US, where he has been charged with espionage for publishing sensitive leaked documents detailing potential American war crimes in both Afghanistan and Iraq.

Australian Greens Senator Peter Whish-Wilson is a member of the ‘Bring Assange Home Parliamentary Group’ campaigning for the journalist’s safe return to the country and voicing their alarm over his deteriorating health while in detention. In November, Whish-Wilson presented a petition to the Senate with 200,000 signatures backing the repatriation of Assange and, on Tuesday, he renewed his calls for the government to take action to protect Assange.

“This Australian journalist faces 175 years – that is, death – in a US jail,” Whish-Wilson said.

And for what? For publishing truthful information in 2010 that embarrassed the US government about their wars in Iraq and Afghanistan and what they thought they could get away with in Guantanamo Bay.

Assange’s mother, Christine, tweeted a message of thanks to Whish-Wilson for his support, saying her son has already “endured nearly a decade of abuse of legal process and brutal persecution” by foreign governments in retribution for revealing evidence of US war crimes.

She has repeatedly called on the Australian government to help secure his release.

Part of the journalist’s extradition challenge is being heard this month, with the second half scheduled for May.

In this conversation (recorded before the recent record rainfall in New South Wales), Joanne Nova of JoanneNova.com.au joins us to analyze the recent Australian bushfires and debunk the notion that they were caused by climate change. We discuss the historical patterns, the lack of drought trends in the long-term data, and the reality that this type of mega-fire could be prevented with simple and well-known land management techniques like controlled burns.

Water restrictions for you, an endless supply for them: How a foreign corporate giant is snapping up 89 BILLION litres of Australia’s H20 as the country suffers its worst drought ever

The mega sale of Australian permanent water rights comes as the country is crippled by one of the worst droughts in its history.

On Tuesday, NSW brought in a complete ban on hoses as part of the toughest water restrictions implemented for more than a decade.

Bushfires are common in the country but scientists say this year’s season has come earlier and with more intensity due to a prolonged drought and hotter-than-usual temperatures. Pictured is a fire danger rating on Saturday at the Mangrove Dam in Central Coast

But no such problem existed for food and agriculture giant Olam International, which sold the 89billion litres of permanent water rights for an astonishing $490 million.

The company sold it to an entity associated with the Public Sector Pension Investment Board, one of Canada’s largest pension investment managers, according to Straits Times.

It will use the water to irrigate almond trees, in a business venture likely to draw criticism over foreign ownership of farms and water.

The water rights are in the lower Murray-Darling Basin.

The chairman of the Victorian Farmers Federation’s water council, Richard Anderson, told the Sydney Morning Herald: ‘Really, all you’ve got is a change of ownership, it (the water) has gone from a Singapore-owned company to a Canadian pension fund.

‘It’s a big bulk of water but it’s still being used in agriculture.

‘It’s not as if they’ve just come in as a speculator and said ”we’ll go and buy a big patch of water and we’ll trade it every year”.’

Actress Pamela Anderson has called on to Australia’s prime minister to pick up the phone and appeal to US President Donald Trump to free Julian Assange, warning it his extradition would set a precedent harmful to all journalists.

The Australian national, founder of whistleblower website WikiLeaks, is looking at up to 175 years in prison under the Espionage Act if he is sent over to the US. He is currently in a UK jail as doctors and supporters are sounding alarm over his health – damaged by prison conditions, solitary confinement, and years of being locked inside the Ecuadorean embassy, where he had asylum.

Anderson characterized as “psychological torture” the way Assange was extracted from the embassy and put in maximum security prison, in a personal plea to PM Scott Morrison to “save an Australian hero” from the horrifying prospect of extradition to the US.

Also on rt.com
‘Mr Assange could die in prison. There is no time to lose’ – over 60 medics in open letter to UK govt.

The Sydney Morning Herald obtained a transcript of Andersons’ speech that she was to deliver in the Australian Parliament House, but was unable to due to scheduling conflicts.

“Every Australian needs to be aware that if Julian Assange is extradited to the USA for publishing then every other journalist and publisher of facts on the internet is vulnerable to execution or 175 years’ imprisonment for simply publishing facts that were delivered to him by whistleblowers,” Anderson said of the man who revealed to the world the civilian casualties of America’s wars in the Middle East. 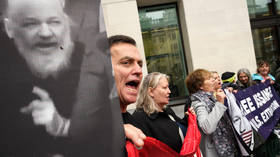 The Hollywood star pointed out that Morrison’s predecessor did help another citizen – film director James Ricketson – who was in Cambodian prison on espionage charges. The current PM should do no less, and ought to pick up the phone to tell Trump and UK PM Boris Johnson “to do their part to save the people’s democratic right in the Western world.”

“He doesn’t want ‘special treatment’, he just wants to be treated like any other Australian citizen and journalist, he has not committed any crime for which a precedent in law stands,”

The Australian press redacted its “front pages” and resorted to televised announcements to protest the enforcement of the law on censorship.

Government censorship in never discussed in these countries, and for good reason; nevertheless, it is very widespread.

Three journalists are being prosecuted for revealing that :

the government intended to use the interception capabilities available to the “Five Eyes” (the four above-mentioned countries plus the United States) to spy on Australian citizens.

At a Sydney “Politics in the Pub” meeting on Thursday night, award-winning Australian journalist Mark Davis revealed new first-hand information exposing the extent of the betrayal of Julian Assange by the Guardian and the New York Times, and refuting the lies both publications have used to smear the WikiLeaks founder.

Davis recounted his experiences documenting Assange’s life in the first half of 2010 for programs screened on the Australia’s Special Broadcasting Service (SBS). Using excerpts from the documentary “Inside WikiLeaks,” the journalist explained that he was present when WikiLeaks worked closely with media partners, including the Guardian and the New York Times, in the publication of the Afghan War logs.

The documents, leaked by the courageous whistleblower Chelsea Manning, comprised 90,000 incident and intelligence reports from the US military, between January 2004 and December 2009. They documented at least 200 civilian deaths at the hands of US and allied forces that had previously been hidden from the public, along with clear evidence of war crimes, including the existence of a secret “black unit” within the US military, tasked with carrying out illegal assassinations.

Davis said the assertions by Guardian journalists that Assange exhibited a callous attitude towards US informants and others who may have been harmed by the publication of the document were “lies.”

David Leigh and Nick Davies, senior Guardian journalists, who worked closely with Assange in the publication of the logs, have repeatedly claimed that Assange was indifferent to the consequences of the publication.

Their statements have played a key role in the attempts by the corporate media to smear Assange, and dovetail with US government claims that the 2010 publications “aided the enemy.” In reality, the US and Australian militaries have been compelled to admit that release of the Afghan war logs did not result in a single individual coming to physical harm.

Davis explained that he was present in “the bunker,” a room established by the Guardian to prepare the publication of the documents.

The Australian Judiciary has issued a gag order on anything being publishing relating to the George Pell matter.

Cardinal Pell was the former archbishop for Sidney and then became the Chief of the Secretariat for the Economy of Saint-Siège (that is, he was the Finance Minister for the State of the City of the Vatican and the Catholic Church). He was tried in Melbourne in December 2018 and convicted of paedophilia. He is due to be incarcerated.

About a 100 media organizations have received a letter from Kerri Judd, Victoria’s Director of State Prosecutions, prohibiting them from publishing the news.

Media censorship is common in Australia, the United States and Israel and even more so in the United Kingdom. The decision to censure can be made by the two branches of state power: the Judiciary (in order to protect certain victims) and the Executive ( without having to explain why).

This case is newsworthy because Australia has a very small Catholic minority yet the media is being gagged after the trial and we do not know why.