Caught on camera! W.H.O admits vaccines are not safe

Video from the Camera Watching Epstein’s Cell “No Longer Exists”

Keep in mind that we have never seen the 89 or 90 videos that filmed what happened at the Pentagon on 9/11.  The videos remain under lock and key, which obviously proves that the story we have been told is false.  If the videos supported the story, they would be released in order to shut up the 9/11 skeptics.

Now it is the Epstein video that somehow the prison failed to preserve and which is also mysterously missing from the backup system.

On July 23, Epstein was sharing a cell with Nick Tartaglione when the disgraced sex trafficker apparently tried to hang himself. Epstein subsequently claimed that Tartaglione, a former cop accused of killing four people in a botched drug deal, had tried to kill him.

However, when Bruce Barket, Tartaglione’s lawyer, requested surveillance footage from the cell at the Metropolitan Correctional Center (which he had formally requested be preserved two days after the suicide attempt), he was told it had disappeared…

“We asked for all the video and photographic evidence to be preserved, specifically this surveillance video. Now it’s gone,” said Attorney Bruce Barket.

“I don’t know the details of how it was lost or destroyed or why it wasn’t retained when it should have been.”

The video footage was relevant to Tartaglione’s defense because it is potentially evidence of the ex-cop’s good character.

“It is on the surface troubling,” Barket added.

According to TMZ, the feds had no explanation for why the footage has gone missing, they said they simply can’t find it.

The judge, helpfully, told prosecutors to look further into what happened to it.

Finally, remember: There are no conspiracies and you can trust the authorities and the mainstream media… and, also, Epstein didn’t kill himself.

My voice is being silenced by free speech-hating Silicon Valley behemoths who want me disappeared forever. It is CRUCIAL that you support me. Please sign up for the free newsletter here. Donate to me on SubscribeStar here. Support my sponsor – Turbo Force – a supercharged boost of clean energy without the comedown.

Uncovered by a cybersecurity firm, an appalling flaw could turn Android-powered devices into spying goldmines, allowing hackers to secretly snap photos and record footage with no permission required.

No stranger to security loopholes, Android designers worked hard to bar apps from accessing cameras and mics, unless users give explicit permission by ticking corresponding boxes in the operating system’s properties. But a bombshell report by cybersecurity firm Checkmarx showed how trivial it is to bypass those restrictions. 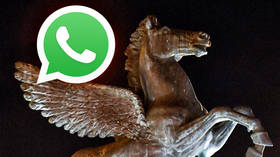 A “rogue application” found not only on Google’s Pixel smartphones, but also on devices from Samsung and other manufacturers, needed no permissions at all to have the camera take pictures and record videos as well as audio records.

Even worse, a hacker could silence the camera shutter to make recording unnoticeable. Hijacking a device was also possible if the phone is locked or the screen is turned off.

The app allowed attackers to remotely upload stolen images and footage to their own servers, requiring the frequently-given permission to access storage.

Disturbingly enough, the flaw, discovered in July but reported this Wednesday, enabled to hijack a phone’s proximity sensor which activates when the device is held up to a user’s ear or lies face down.

Checkmarx have demonstrated a bogus attack in a video it uploaded to YouTube.

It said that Google fixed eavesdropping weakness by releasing a security patch later in the month; Samsung followed suit, although it wasn’t clear when.

Android’s major rival, Apple’s iOS, isn’t free of malicious bugs either. Several days ago, iPhone users began complaining about the Facebook app that turns the camera on without their permission.

Aside from that, Facebook, which owns WhatsApp messenger, warned earlier in November that a system vulnerability allows hackers to send “a specially crafted MP4 file” to its Android and iOS users.

The bug appears to be similar to the one found out this spring, which was used by hackers to infect devices with malware, disguised as ordinary calls.

It has since been dealt with, but the cyberattacks caused controversy in India because over 20 local lawyers, journalists and human rights campaigners were among the 1,400 users affected by the hacks worldwide.

Originally published by GR in February 2009, this article focusses on the role of Hollywood as an instrument of propaganda. The Deep Politics of Hollywood are part of the broader process of media manipulation and disinformation in support of US led wars.

Here we build a prima facae case supporting the idea that Hollywood continues to be a target for infiltration and subversion by a variety of state agencies, in particular the CIA. Academic debates on cinematic propaganda are almost entirely retrospective, and whilst a number of commentators have drawn attention to Hollywood’s longstanding and open relationship with the Pentagon, little of substance has been written about the more clandestine influences working through Hollywood in the post-9/11 world. As such, our work delves into the field of what Peter Dale Scott calls “deep politics”; namely, activities which cannot currently be fully understood due to the covert influence of shadowy power players.

A variety of state agencies have liaison offices in Hollywood today, from the FBI, to NASA and the Secret Service. Few of these agencies, though, have much to offer in exchange for favourable storylines, and so their influence in Hollywood is minimal. The major exception here is the Department of Defense, which has an ‘open’ but barely publicized relationship with Tinsel Town, whereby, in exchange for advice, men and invaluable equipment, such as aircraft carriers and helicopters, the Pentagon routinely demands flattering script alterations. Examples of this policy include changing the true identity of a heroic military character in Black Hawk Down (2001) due to his real-life status as a child rapist; the removal of a joke about “losing Vietnam” from the James Bond film Tomorrow Never Dies (1997), and cutting images of Marines taking gold teeth from dead Japanese soldiers in Windtalkers (2002). Instances such as these are innumerable, and the Pentagon has granted its coveted “full cooperation” to a long list of contemporary pictures including Top Gun (1986), True Lies (1994), Executive Decision (1996), Air Force One (1997), The Sum of All Fears (2002), Transformers (2007), Iron Man (2008), as well as TV series such as JAG (1995-2005).