The US military industrial complex has grown into a self-sustaining organism with an immune system that attacks and smothers any threat to its food supply – the taxpayers’ money, writes renowned defense analyst Andrew Cockburn. 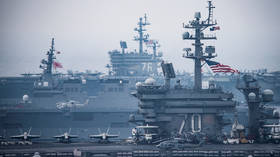 Cockburn outlines the process that allows US defense contractors to thrive despite repeatedly missing deadlines and producing overpriced, subpar equipment. The system has evolved to be very good at defending itself – while leaving the country, “in reality so poorly defended,” he writes in his latest think piece for Harper’s Magazine titled ‘The Military-Industrial Virus: How bloated defense budgets gut our armed forces’.

Cockburn, whose 40+ years of experience include numerous books and publications on the US’ military complex, its foreign wars and adversaries, looks at the current state of America’s armed force – from the overpriced “disaster” that is the F-35 fighter, to the few “dilapidated” minesweepers, to faulty personal protection and radios American soldiers are equipped with – and compares it to the exorbitant defense bills the taxpayer has to foot.

The MIC is embedded in our society to such a degree that it cannot be dislodged, and also that it could be said to be concerned, exclusively, with self-preservation and expansion, like a giant, malignant virus.

The system’s “beauty,” he ironically points out, “lies in its self-reinforcing nature.” Every new system, weapon, or piece of equipment, costs up to twice as much as the one it’s built to replace, and is often either plagued by bugs that have to be fixed (for additional money), or is straight-up worse than the predecessor. Busted deadlines and post-rollout fixes then inflate the costs even further, lining the defense contractors’ pockets.

With this in mind, defense spending has been growing at a steady pace since World War II, and when there’s talk of slashing that growth, a perceived ‘threat’ emerges to justify bumping it up. This was the case with the “fraudulent specter” of the “missile gap” with the Soviet Union during the Cold War, or the war in Vietnam.

Opposition to the exorbitant spending among Washington’s politicians is muted and misdirected,

Israel plans to construct the world’s longest underwater gas pipeline together with Cyprus and Greece to carry Eastern Mediterranean gas on to Italy and the EU southern states. US Secretary of State Mike Pompeo has just endorsed the project. It will run smack up against a competing Turkish-Russian gas pipeline, Turk Stream, against a potential Qatari-Iran-Syria pipeline, as well as de facto undercut the Washington attempt to get more US LNG gas to the EU to reduce Russian dependency.

The project, under discussion for several years since Israel discovered major gas reserves in the offshore Leviathan Field, is known as the East Med Pipeline Project. Natural gas will flow from Leviathan via Cyprus, Crete and Greece to reach its terminal at Otranto on the southeast heel of Italy. Plans call for a pipeline of 2,100 kilometers running three kilometers deep under the Mediterranean. Cost is estimated at $7 billion with a five year construction period.

The East Med is part of a complex of new geopolitical fault lines across the entire Middle East. Notable is the fact that the Gulf Arab Emirate, UAE, has already invested $100 million in a project the Jerusalem Post calls, “a covert cornerstone underpinning the change in relationship between parts of the Arab world and the Jewish State.” This would seem to be a reference to the 2017 proposal of the US to create an “Arab NATO” with Saudi Arabia and other Gulf Arab states, backed by Israeli intelligence input, to counter the influence of Iran in the region. Little is said today about any Arab NATO, but ties between Netanyahu’s Israel and key Sunni Muslim Arab countries remain strong.

One regional player definitely not happy about the proposed Israeli East Med pipeline is Erdogan’s Turkey. When Israel first proposed East Med two years ago, Erdogan quickly turned to Russia to sign a deal to build the Gazprom’s Turk Stream to rival Israel. East Med would tie into gas fields in the Greek EU part of Cyprus. In recent months Erdogan has moved Turkey closer to Iran and especially Qatar, home to key figures in the Muslim Brotherhood, as tensions with Saudi Arabia and Israel increase. The Sunni vs Shi’ite conflict seems to take a back seat to geopolitical power and control of pipelines.

The Complex and Frustrating Reality of Recycling Plastic

Flint Legionnaires’ Disease Survivors Speak Out: “Every Day Is a Challenge”

Global consumers now use a million plastic bottles every minute, 91 percent of which are not recycled. Our growing consumption of single-use plastic is evident in the form of ever-expanding landfills, as well as pollution on our sidewalks, along roadways and in natural ecosystems. Plastic that is littered or blown out of waste bins makes its way into storm drains, streams and rivers. Ultimately, up to 8 million metric tons of it enter the world’s oceans every year.

Scientists aren’t sure how long it takes for plastic to fully biodegrade—estimates range from 450 years to never, National Geographic reported in its June issue, which is devoted to the mounting plastic pollution problem. But we know enough to know that the staggering 9.2 billion metric tons of plastic produced since the 1950s isn’t going anywhere anytime soon. At this rate, our oceans will contain more plastic than fish by 2050.

Many now consider ocean plastic pollution an existential threat on par with climate change, but it seems like it should be an easy one to fix. Plastic is recyclable, after all, so why can’t we just recycle it? It turns out it’s not as simple as it sounds.

Around two-thirds of the plastic that enters the ocean from rivers is carried by only 20 waterways—the majority of which are on the Asian continent, where access to waste collection and recycling is often limited. Even in countries with established waste management infrastructure, the picture remains bleak: Less than 10 percent of the plastic used in the United States is recycled, according to the most recent Environmental Protection Agency (EPA) data.

American citizens have a problem telling the difference between facts and opinion. That’s the finding of a recent survey carried out by the respected Pew organization.

It was found that only a quarter of the people polled were able to correctly distinguish between a factual statement and an opinion claim. In other words, the majority of those Americans surveyed wrongly believed that information presented to them purporting as facts were indeed facts, when the information was actually merely a subjective claim or opinion.

For example, when an opinion statement like “democracy is the best form of government” was read to them, most of the respondents defined that as a fact. Only some 25 per cent of the more than 5,000 people surveyed by Pew could correctly differentiate between facts and subjective statements.

Moreover, as the Reuters report on the study, put it: “They tend to disagree with factual statements they incorrectly label as opinions, Pew said.”

The latter tendency suggests that Americans are easily misled by false information, and perhaps more disturbingly, that they are closed-minded towards information that challenges their prejudices.

This commentary is not meant to unduly denigrate American citizens. It would be interesting to see what the results would be from a similar survey conducted in Europe, Russia or China.

Regardless of not having such a comparison, however, the Pew study indicates that there is a significant cognitive problem among US people in being able to assess facts from opinions. Given that opinions can be easily manipulated, misconstrued or mendacious that in turn points to a problem of American society being vulnerable to so-called fake news.

US President Donald Trump has almost singlehandedly coined the phrase “fake news” when he rails against news media which are adverse to his personality and his Republican party politics.

Trump himself is often a brazen purveyor of his own brand of fake news. Recall the absurd spat he had with the media over the size of his inauguration crowd, claiming against aerial photographic evidence to have a record huge attendance.

Nonetheless, to a degree, Trump has a fair point. The US corporate news media in favor of the Democrats have been guilty of pushing stories and issues which lack factual credibility.

Half a century ago, outgoing President Dwight D. Eisenhower coined the term “military-industrial complex” to describe the fascistic collusion between the Pentagon and America’s burgeoning armaments industry. But in our day and age we are witnessing the rise of a new collusion, one between the Pentagon and the tech industry that it helped to seed, that is committed to waging a covert war against people the world over. Now, in the 21st century, it is time to give this new threat a name: the information-industrial complex.

CLICK HERE for transcript and sources for this video