This article contains hard proof that cannot be questioned or denied, which you may submit to any government agency or healthcare professional. What is not yet proven but coming into focus is that the US biological weapons program at Fort Detrick, Maryland, equipment and certainly key staff, certainly migrated to secret labs at large state universities in order to “hide in plain sight.”

Follow the careers, all links are included, of those who worked on the Wuhan-COVID project in 2017.

Also, note that the exact same personnel and equipment is used for fake “prevention” research and testing as weaponization and actual production.

Since this article was written, we have begun to look at worldwide operations of US nuclear/bio/chem contractor, Kushner-Trump favorite, Battelle, and their secret labs around the world.

When we began, our people started to be threatened.  That was a serious mistake.

Submit this paper to any physician, or other qualified bio-sciences specialist.  See what they say.

Documents below will show that research to create COVID 19 began in the United States in 2006 and culminated in a successful bio-weapon in 2015, with work done at the University of North Carolina and at Harvard and at the Food and Drug Administration’s lab in Arkansas.

Their work was titled:

They did this and more, so much more as you will read below.

Key Laboratory of Special Pathogens and Biosafety, Wuhan Institute of Virology, Chinese Academy of Sciences, Wuhan, China supplied the Wuhan Bat Virus which was used in the American study.  Their name was included for that reason only.

COVID 19 was a US Army bio-weapons project to manufacture a pneumonia-causing disease that would be nearly impossible to vaccinate for in patients over 40 years old.

The proof is here, simply scroll down.  The study was run by the University of North Carolina and funded by USAID/CIA.

The research, led by a Canadian team of researchers at York University in Ontario, looked at 512 mother-child pairs living in six Canadian cities. Fluoride levels were measured through urine samples collected during pregnancy.

They also estimated the women’s fluoride consumption based on the level of fluoride in the local water supply and how much water and tea each woman drank. The children’s IQ scores were then assessed between the ages of 3 and 4. As reported by the Fluoride Action Network (FAN):2

“They found that a 1 mg per liter increase in concentration of fluoride in mothers’ urine was associated with a 4.5-point decrease in IQ among boys, though not girls.

When the researchers measured fluoride exposure by examining the women’s fluid intake, they found lower IQ’s in both boys and girls: A 1 mg increase per day was associated with a 3.7 point IQ deficit in both genders.”

Support for the importance of this study

The findings were deemed so controversial,

US Secretary of State Mike Pompeo has confirmed that the administration has invoked a rarely-used legal statute to “immediately” clear $8.1 billion in arms sales to its Arab allies in order to “deter Iranian aggression.”

The transfer of weapons to Saudi Arabia, the United Arab Emirates and Jordan, which reportedly includes a number of Raytheon precision-guided munitions (PGMs) and Javelin anti-tank missiles, cannot be delayed any longer “during a time of increasing regional volatility,” Pompeo said in a statement on Friday.

That “volatility”, according to the top US diplomat, comes from Iran, whose perceived “threat” the Trump administration has been drumming up in the recent weeks. The Pentagon has sent a carried group, bombers, air defense missiles and 1,500 troops to the region, having accused Tehran of an ongoing “campaign” against Washington’s allies and interests. 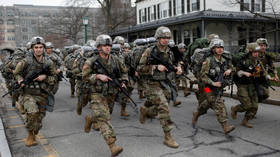 “These sales will support our allies, enhance Middle East stability, and help these nations to deter and defend themselves from the Islamic Republic of Iran,” Pompeo said, criticizing the Senate for stalling on the review of the deals.

Foreign arms sales normally require congressional review, but the law allows the president to skip legislative approval by declaring an emergency and citing “national security interests.” The same method was used to sell weapons to Saudi Arabia in the run-up to the 1991 Gulf War and the 2003 invasion of Iraq.

Lawmakers have been refusing to give their seal of approval to the weapons sales, in part due to concerns over the reports of mounting civilian casualties in the Saudi-led bombing campaign in Yemen.

Senator Robert Menendez (D-New Jersey), ranking member of the Senate Foreign Relations Committee, blasted the Trump administration’s decision to move ahead with the sales while sidestepping a congressional review.

“I am disappointed, but not surprised, that the Trump administration has failed once again to prioritize our long-term national security interests or stand up for human rights, and instead is granting favors to authoritarian countries like Saudi Arabia,” Menendez said.

Without going into specifics of the deliveries, Pompeo said that the military equipment that to be shipped to the Arab countries includes “intelligence,

An explosive report by Reuters confirms that John Bolton sabotaged the denuclearization talks between Kim Jong un and Donald Trump in Hanoi in February. According to a March 29 exclusive by journalists Lesley Wroughton and David Brunnstrom:

“Donald Trump handed North Korean leader Kim Jong Un a piece of paper” demanding that Kim surrender all of his “nuclear weapons and bomb fuel to the United States.” Trump also added a number of unrelated demands including “fully dismantling” all “chemical and biological warfare program(s)…. and ballistic missiles, launchers, and associated facilities.” Trump surprised Kim by demanding complete, unilateral disarmament in exchange for a flimsy promise to lift economic sanctions sometime in the future. Naturally, Kim rejected the offer.

Here’s more from the same article:

“The document appeared to represent Bolton’s long-held and hardline “Libya model” of denuclearization that North Korea has rejected repeatedly….North Koreans rejected Bolton’s repeated demands for it to follow a denuclearization model under which components of Libya’s nuclear program were shipped to the United States in 2004.

Seven years after a denuclearization agreement was reached between the United States and Libya’s leader, Muammar Gaddafi, the United States took part in a NATO-led military operation against his government and he was overthrown by rebels and killed” (“Exclusive: With a piece of paper, Trump called on Kim to hand over nuclear weapons”, Reuters)

Bolton presented Kim with an offer he knew Kim would reject, the same offer that led to the destruction of Libya and the savage murder of Gaddafi. Bolton wanted the talks to fail so he could push for tougher sanctions that would pave the way for regime change. That was his goal. Kim’s nuclear weapons were never the target, they were merely the pretext for intensifying the economic strangulation, the relentless belligerence and the threats of war.

But why would Trump agree to go along with this fraud? And why has Trump deployed more troops to Syria while green-lighting Israel to annex the Golan Heights?

Is there a connection between Trump’s (recent) foreign policy reversals and the termination of the Mueller investigation? Did Trump make a deal with his deep state antagonists to get Mueller off his back?

Turmeric is one the most thoroughly researched plants in existence today.  Its medicinal properties and components (primarily curcumin) have been the subject of over 5600 peer-reviewed and published biomedical studies.  In fact, our five-year long research project on this sacred plant has revealed over 600 potential preventive and therapeutic applications, as well as 175 distinct beneficial physiological effects. This entire database of 1,585 ncbi-hyperlinked turmeric abstracts can be downloaded as a PDF at our Downloadable Turmeric Document page, and acquired either as a retail item or with 200 GMI-tokens, for those of you who are already are members and receive them automatically each month.

Given the sheer density of research performed on this remarkable spice, it is no wonder that a growing number of studies have concluded that it compares favorably to a variety of conventional medications, including: