The US military has been unable to find any evidence that the Russian government paid bounties on US troops to Taliban-linked fighters in Afghanistan, confirming what was already obvious to anyone who hasn’t had their brain stem hijacked by mass media-induced Russophobia.

Two months after top Pentagon officials vowed to get to the bottom of whether the Russian government bribed the Taliban to kill American service members, the commander of troops in the region says a detailed review of all available intelligence has not been able to corroborate the existence of such a program.

“It just has not been proved to a level of certainty that satisfies me,” Gen. Frank McKenzie, commander of the U.S. Central Command, told NBC News. McKenzie oversees U.S. troops in Afghanistan. The U.S. continues to hunt for new information on the matter, he said.

“We continue to look for that evidence,” the general said. “I just haven’t seen it yet. But … it’s not a closed issue.”

McKenzie’s comments, reflecting a consensus view among military leaders, underscores the lack of certainty around a narrative that has been accepted as fact by Democrats and other Trump critics, including presidential nominee Joe Biden, who has cited Russian bounties in attacks on President Donald Trump.

2 months after top Pentagon officials vowed to get to the bottom of whether the Russian gov’t bribed Taliban to kill US service members, the commander in the region says a review of the intel has not been able to corroborate the existence of such a program https://t.co/RaiUV2XtHr

Like many other critical voices, I said from the beginning that there was no reason to believe the Russian bounties narrative and that the mass publication of baseless and nonsensical claims circulated anonymously by US intelligence operatives constitutes journalistic malpractice. There is no excuse for a reporter to ever present anonymous CIA press releases under the guise of news, especially when they make no sense; the US-centralized coalition in Afghanistan is a hostile occupying force and there are an essentially limitless number of people there who require no financial incentive to attack them. 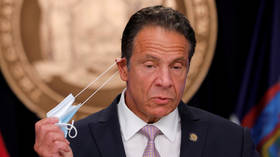 Pew Research Center is out with an analysis of coronavirus deaths. It shows they are overwhelmingly concentrated in Congressional districts represented by Democrats.

Democrats represent 41 of 44 districts with the highest number of Covid-19 deaths.

This lopsided distribution could help explain a partisan divide in the views regarding whether a national shutdown was the right move, and whether it’s time to end it.

The coronavirus outbreak has taken the lives of nearly 100,000 Americans. Yet since the start of the outbreak, the death toll has been concentrated in a just a few places – mostly large metropolitan areas, especially the New York City area.

The places hit hardest by the coronavirus outbreak – which have relatively large shares of ethnic and racial minorities and residents living in densely populated urban and suburban areas – are almost all represented by congressional Democrats.

A new Pew Research Center analysis of data on official reports of COVID-19 deaths, collected by the John Hopkins University Center for Systems Science and Engineering, finds that, as of last week, nearly a quarter of all the deaths in the United States attributed to the coronavirus have been in just 12 congressional districts – all located in New York City and represented by Democrats in Congress. Of the more than 92,000 Americans who had died of COVID-19 as of May 20 (the date that the data in this analysis was collected), nearly 75,000 were in Democratic congressional districts.

Of the 44 hardest-hit congressional districts – the top 10% in terms of deaths – 41 are represented by Democrats, while three are represented by Republicans. These include the New York-area districts, as well as those in the Boston, Detroit and New Orleans metropolitan areas. The average death toll in each of these hardest-hit districts was 1,122 as of May 20.

Kudos to the Sonoma County, CA Democrats for creating a resolution in support of local control over deployment of all wireless communications facilities:

WHEREAS, in 2018, the Federal Communications Commission (FCC) adopted regulations limiting the abilities of cities and states to regulate small cell sites (e.g., pole attachments) needed for the deployment of 5G, substantially curtailing local governments’ ability to regulate telecommunications infrastructure; and

NOW THEREFORE BE IT RESOLVED, that the Sonoma County Democratic Party urges our city councils, county supervisors, and their respective planning departments to begin updating their telecommunication ordinances in preparation for restoring our local governments’ ability to balance competing interests for the use of the public rights-of-way, and to call on Congress to support H.R. 530 (Eshoo-D-CA-18) and S. 2012 (Feinstein-D-CA) both of which restore local control over the deployment of wireless communications facilities by overturning the FCC regulations.

Resolution adopted by the Sonoma County Democratic Party on March 10,

Democratic Party royal family member Chris Cuomo delivered a pearl-clutching, hand-wringing monologue on CNN last night about how appalling and outrageous it is for Republicans to accuse Democrats of having covert loyalties to a foreign government.

Cuomo, who is the son of a Democratic New York Governor and the brother of another Democratic New York Governor, began his “Closing Argument” segment rationally enough, berating the 194 Representatives who voted against opposing Trump’s ability to initiate an Iran war without congressional approval. Obviously the more resistance there is to Mike Pompeo manipulating the highly suggestible Commander-in-Chief into any more reckless warmongering against Tehran, the better.

But then, without any coherent segue, Prince Fredo began babbling about Republicans leveling baseless accusations about Democrats having loyalties to Iran.

“Shame on you and every Trumper and never-Trumper who voted against this.”@ChrisCuomo addresses those who voted against the Iran War Powers resolution and those in the GOP who aim to divide the country when unity is a life and death matter. pic.twitter.com/kNMnXEeTdJ

“They’re in love with terrorists,” we see Republican Representative Doug Collins saying in Cuomo’s clip. “They mourn Soleimani more than they mourn our Gold Star families, who are the ones who suffered under Soleimani. That’s a problem.”

Cuomo also highlighted a tweet by Republican Representative Mark Meadows claiming that “Democrats are falling all over themselves equivocating about a terrorist” (which also drew angry Democratic backlash on the platform), and expressed astonishment at war crime fetishist Nikki Haley’s ridiculous claim that “The only ones that are mourning the loss of Soleimani are our Democrat leadership, and our Democrat presidential candidates.”

“So on the right, stop spreading toxic gossip about who likes terrorists,” Cuomo bloviated in a long-winded conclusion,