Thousands of angry farmers took to the streets and blocked roads and railways across India on Friday, in protest against new farming legislation that would halt government programs that purchase grains at fixed prices, therefore allowing big corporations to dictate market prices, reported Reuters.

Much of the protests are centered in the states of Punjab and Haryana. The Indian government continues to reject the notion the legislation would hurt farmers; nevertheless, after Sunday (Sept. 27), farmers will no longer have the ability to sell certain grains to state-controlled markets, which would allow them to sell to private buyers.

Prime Minister Narendra Modi said the new farm legislation would “completely transform the agriculture sector” and empower “tens of millions of farmers” while driving much-needed investments and modernization efforts in the industry.

Reuters notes, as soon as next week, farmers will be able to sell grains to institutional buyers and big retailers such as Walmart. The government will still buy rice and wheat at fixed prices.

But none of the assurances from the Modi government have calmed farmers who reside in Punjab and Haryana – India’s northern farm belt. Thousands poured onto the streets Friday, blocking roads and railway tracks, shouting anti-government slogans.

More than 100 farmer unions took part in the demonstrations. However, many farmers did not socially distance themselves from others nor wear masks, comes when coronavirus cases and deaths are surging in the country.

Bhupinder Singh Mann, the president of the All India Kisan Coordination Committee, told AFP, the “government is trying to exploit the farmers, they don’t care about us.”

This year, as the Grand Lake Theater is closed due to Covid-19, we are doing an interactive webinar online only…you will be able to participate in the Q&A. This Interactive WEBINAR Will Be LIVE STREAMED on

Thursday, September 10, 2020 at: Noon Pacific * 3pm Eastern * 19:00 GMT
(8 hours duration) (You will be able to participate in the Q&A)
The entire event will be archived for 7 days afterwards so you can arrive late or watch it later or again. This year’s Film Festival is dedicated to the memory of Chuck Millar, Giuletto Chiesa, and Sandra Brown, courageous, loving, truth seekers, who will be deeply missed.

2020 is an unusual year; weddings have been cancelled, schools closed, almost all large public gatherings banned, the global economy dismantled; the middle class and Main Street’s small and medium sized businesses are struggling to survive. In California, the film industry, the theaters have been hit hard. The Grand Lake Theater, which has generously hosted countless events and 15 prior 9/11 Truth Film Festivals is currently closed.

In March, the Northern California 9/11 Truth Alliance could no longer meet legally and was forced to hold meetings in cyberspace. No Lies Radio hosted Zoom meetings and discussions and organizing continued, despite the obstacles and challenges that everyone faced The group voted to go “virtual” this year, with the assistance of No Lies Radio who has been webstreaming the live Film Festival for many years. 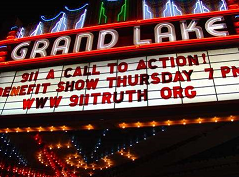 We will miss the Grand Lake Theater, the chance to hug, greet and talk with old friends and make new ones, the popcorn, the cookies, being together, in person. However, a virtual Film Festival is the best we can do, and does actually allow some interactivity, questions and answers, and bringing in distant speakers, without dealing with airports and hotels. Please join us! Voice your questions for our guest speakers and panelists. Guns and Butter’s Bonnie Faulkner will kick off the Film Festival, as she has for 16 years! We will post the program here when we finalize it.

As this dramatic year continues to unfold, our program is evolving; we have penciled in films that are still in production,

“Forgiveness” is a concept that is constantly exploited by manipulative abusers. If anything our world suffers from an overabundance of forgiveness: toward murderous power structures, toward lying news media, toward rapacious oligarchs and cronyistic politicians. Don’t forgive them.

I’m distrustful of anyone who prattles on about the importance of forgiveness, because those who do so tend to do it because they have a vested interest in the concept. They’re usually either an abuser themselves, or an abuser’s brainwashed victim defending their indoctrination.

Remember, all abusive relationships have “forgiveness” as a central tenet, because without forgiveness of abuse there could be no ongoing relationship. It’s as true of global power structures as it is of domestic partnerships.

Speak the truth and be loud about it. Choosing not to speak out is just making that much more space for the manipulative liars who are shouting above everyone as they drive our world into disaster, and you are much smarter, wiser, and more qualified to speak than they are.

No matter how unqualified you might feel to speak, you are infinitely more qualified than the loudest voices in our society who normalize and defend our murderous, oppressive, exploitative status quo using lies and manipulation. Speak even louder and more confidently than them.

Without warmongering and militarism, sociopathic intelligence agencies wouldn’t be needed.

Without government secrecy, the government couldn’t commit evil at home and abroad.

It all starts with war.

If you ever feel unimportant, remember that rich and powerful people are constantly pouring effort and wealth into trying to manipulate the thoughts in your head.

A lot of evil hides behind the irrational assumption that there is a limit to the amount of evil your government would be willing to perpetrate.

Hi I’m Leftish McPundit. I gain leftist cred by speaking critically of past acts of US imperialism and the lies which facilitated them,

14-08-20 06:55:00, Big Pharma wants you to believe the in antibody-protection paradigm, so you into their COVID serological/antibody tests & coming COVID vaccine. However the…

By The Corbett Report

Do your own research! Read it for yourself! It’s in the show notes! How many times have I uttered these words? These exhortations represent the founding ethos of The Corbett Report. I want you to read the source documents for yourself and come to your own conclusions.

But guess what? The establishment doesn’t want you to think for yourself, and now that the Corona World Order is beginning the Great Reset, they are coming out and saying as much. Find out the details in this week’s edition of #PropagandaWatch.

Visit James Corbett at CorbettReport.com. Subscribe to his channel on YouTube and Bitchute, and support him on Patreon.

Provide, Protect and Profit from what’s coming! Get a free issue of Counter Markets today.