Americans are split on whether to trust news media with information regarding the coronavirus outbreak, according to a new poll.

As Statista’s Willem Roper notes, a joint poll conducted by NPR, PBS NewsHour and Marist, shows that 47 percent of U.S. adults responded by saying “not very much” or “not at all” when asked how much they trusted news media with coronavirus information.

Unsurprisingly, Americans views on the news media were split along partisan lines. For Democrats, only 33 percent said they had little to no trust in the news media. Republicans, however, responded at a substantial 60 percent on their lack of confidence in the news media handling coronavirus information. Independents were equally high in their skepticism at 47 percent

You will find more infographics at Statista

Democrats and Republicans have been pointing fingers at news organizations since the coronavirus outbreak began to reach the U.S. Some Republicans believed liberal-leaning news outlets were blowing the outbreak out of proportion to damage the presidency and economy, while some Democrats believed conservative-leaning outlets were endangering American lives by not taking the outbreak seriously enough.

Billionaire speculator George Soros has called for Facebook CEO Mark Zuckerberg and his COO to be deposed, accusing them of seeking to “maximize profits” without regard for consequences, in perhaps the most ironic attack ever.

Zuckerberg and Facebook Chief Operating Officer Sheryl Sandberg “follow only one guiding principle: maximize profits irrespective of the consequences,” Soros snarled on Friday in a New York Times op-ed. While his detractors might have used those exact words to describe the financier’s own “guiding principle,” Soros meant it as a scathing condemnation.

One way or another, they should not be left in control of Facebook.

Also on rt.com
Monopoly? What monopoly? Big Tech defends itself from antitrust allegations with denial & doublespeak

Soros doesn’t just want Zuckerberg and Sandberg removed from power – he wants “those who spread false information” punished more severely. Lest one think he’s merely referring to users who circulate viral hoaxes, the iron-fisted philanthropist made it clear he had set his sights on Section 230, the now-well-known US law that protects social media platforms from liability for content their users post. Facebook, he said, should be treated as a publisher, not a platform, and “held accountable for the content that appears on its site.”

Accusing the Menlo Park behemoth of maintaining an “informal mutual assistance operation or agreement” with US President Donald Trump “in which Facebook will help President Trump to get reelected and Trump will, in turn, defend Facebook against attacks from regulators and the media,” Soros sounded for all the world like one of the ‘conspiracy theorists’ that the fact-checking NGOs he funds have tried to muscle off Facebook. 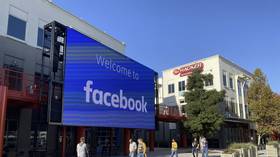 Soros’s denunciations of what he insisted was pro-Trump bias on the platform – first voiced last week at the World Economic Forum in Davos – echoed the laments of prominent Democratic politicians. No surprise, given that he’d already poured $5.1 million into the party’s coffers by August 2019. Hillary Clinton, who blamed her failed 2016 candidacy on Facebook’s spread of so-called “

Russia’s relations with “Israel” in recent years are much deeper and more strategic than its historic ones with Palestine so it’s unthinkable that Moscow won’t tacitly support the so-called “deal of the century” despite expectedly voicing mild reservations about it in public for the sake of retaining its regional soft power.

Trump finally unveiled his much-touted and over-hyped “deal of the century” on Tuesday, which more or less matches what was previously reported about its contents. In practice, it treats the Palestinians as a conquered people who are forced to perpetually accept “Israel‘s” hegemony seeing as how the latter will retain its existing settlements and continue to functionally exercise dominance over them in almost all matters of life. Palestinian refugees and their descendants also won’t be allowed to return to their original homeland except for the part that the US and “Israel” recognize as constituting their so-called “state”, meaning that they couldn’t in theory democratically overturn the current state of affairs between them and their oppressors if they voted to dismantle the self-professed “Jewish State” and replace it with something more inclusive for example. The American leader portrayed his plan as supposedly being the “only option for peace”, which isn’t surprising since nobody should have expected anything different from the US.

The “deal of the century” is basically an attempt to generate more foreign support for “Israel’s” decades-long occupation of Palestine, “sweetening” the deal with promises of economic aid so as to create the “publicly plausible” pretext for Muslim countries such as those in the GCC to officially support this plan. It’s already an open secret that those aforementioned countries are on excellent terms with “Israel”, especially in regards to coordinating joint regional strategies against their shared Iranian foe, so they’re expected to eventually (if not immediately) use this proposal as their excuse for openly formalizing their relations. The dramatic marketing behind the plan also puts Palestine’s sincere and superficial international supporters alike in a soft power bind since they’ll now be portrayed as supposedly “standing against peace in order to advance their (‘anti-Semitic’) interests” if they don’t go along with it. This is even more so the case since the memory of the 75h anniversary of the liberation of Auschwitz which helped “justify” “Israel’s” establishment is still fresh on the world’s mind.

Please take a moment to support Ole on Patreon!

Much of the daily content we publish is notable to us for various reasons. Having said that, the views and opinions expressed in this content, (articles, videos or any other content), are those of the authors and do not necessarily reflect the opinions of the authors of this site.

As always, please do your own research. Please do not believe what you are told. Take what you like, and leave the rest.