By Chris Sweeney, author and columnist who has written for newspapers such as The Times, Daily Express, The Sun and Daily Record, along with several international-selling magazines. Follow him on Twitter @Writes_Sweeney

British protest group StandUpX is gaining in numbers. They mostly protest restrictive anti-Covid-19 measures, but members also oppose 5G and vaccines, among other things. The overarching belief is that democracy is under threat.

StandUpX made headlines for storming a busy branch of supermarket Morrisons in London recently. This weekend, they have marches planned all over the UK including in London, Birmingham, Bedford, Bournemouth and Norwich.

If you scroll through the group’s Facebook feed, you’ll see the concerns shared by many in the wider British public – the over-reach of Covid-19-related restrictions, the shifting numbers and narratives, the fear of draconian enforcement of mask-wearing and lockdowns – floating in a soup of dubious claims and conspiracy theories, which include anti-vaccine speculations, claims that 5G towers spread viruses, and the denial of the coronavirus’ very existence. The group doesn’t turn anyone away, which could be the reason its numbers appear to be swelling. 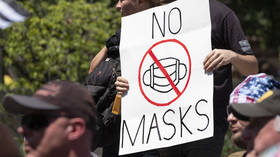 RT spoke to senior member and activist Joss – he was part of the incident in Morrisons, but doesn’t want his full name publicized for fear of being targeted.

“We’re a community trying to spread awareness,” he said. “This new normal is being spouted about and we’re told we need to accept it. It was supposed to be a three-week lockdown to flatten the curve. We did that, the hospitals were never overwhelmed, yet here we are 14 weeks later still partially locked down.”

The lockdown doesn’t just worry the StandUpX members. A lot of people don’t like having their entire lives overturned on the orders of a government that has itself demonstrated a very poor understanding of the situation and the science that’s supposed to guide such measures.

“The restrictions are ridiculous and so unnecessary for a virus with such a small death rate. My view is it’s a real virus, but the exaggeration is massive,” Joss says. “They call it a pandemic but pandemics are supposed to take at least five percent of the population and according to Doctor Dan Erickson it only has a 0.03 death rate – it’s a tiny amount and it’s not a pandemic.”

California-based Dr Erickson’s claims were among those removed from YouTube and Facebook and a video of his interview on FoxNews was also taken down due to claims of inaccuracy.

Numerous so-called
“front groups” operate in the United States.
A front group is very simply an organization
that pretends to have a certain program
while at the same time using that identity
as cover to promote a hidden agenda that is
something quite different, often opposed to
what is being said publicly. The Global
Climate Coalition is, for example, an
organization funded by fossil fuel providers
that works to deny climate change and other
related issues. The Groundwater Protection
Council does not protect water resources at
all and instead receives its money from the
fracking industry, which resists any
regulation of water pollution it causes. The
Partnership for a New American Economy has
nothing to do with protecting the U.S.
economy and instead seeks to replace
American workers with H1B immigrant
laborers. Even the benign sounding National
Sleep Foundation, is in reality a Big Pharma
creation intended to convince Americans that
they need to regularly use sleep inducing
drugs.

Front groups in a
political context can be particularly
dangerous as they deceive the voter into
supporting candidates or promoting policies
that have a hidden agenda. The
Washington-based Foundation for Defense of
Democracies, is, for example, uninterested
in preserving democracies unless that
democracy is Israel, which many observers
would prefer to describe as an apartheid
state. It is funded by Zionists billionaires
and its leadership meets regularly with
Israeli officials. The American Enterprise
Institute is likewise a neocon mouthpiece
for economic imperialism and regime change
disguising itself as a free market advocate
and the Brookings Institution is its liberal
interventionist counterpart.

Front groups are
sometimes largely fictional, on occasion
creations of an intelligence agency to give
the impression that there exists in a
country a formidable opposition to policies
pursued by the governing regime.

In it, she described being “afraid to breathe the air” or go out in the sun, warned of mass extinctions of plants and animals and urged rich nations to stop spending so much money on war and “let go of some of our wealth”.

Sound familiar? It Should:

Severn Cullis-Suzuki’s speech to the UN in 1992 on climate change sounds an awful lot like Greta Thunberg’s in 2019.

I cut the two together to show just how similar the language is: pic.twitter.com/18ptTzX4M4

“We are a group of 12 and 13-year-olds trying to make a difference. We’ve raised all the money to come here ourselves, to come 5000 miles to tell you adults you must change your ways.

“I am afraid to go out in the sun now because of the hole in our ozone. I am afraid to breathe the air because I don’t know what chemicals are in it. I used to go fishing in Vancouver, my home, with my dad, until just a few years ago we found the fish full of cancers. And now we hear of animals and plants going extinct. Every day, vanishing forever.

“In my life, I have dreamt of seeing the great herds of wild animals,

For over a decade, pro-Israel and ultra-nationalist Israeli settler groups have sought to weaponize the popular online encyclopedia, Wikipedia, through concerted covert editing campaigns, offering Wikipedia editing courses to West Bank settlers and even formal alliances between Israel and Wikipedia to allow Israelis to create and edit content in a variety of languages.

In recent years, this alliance between pro-Israel partisans and Wikipedia has stepped up, largely in response to the growth of the Boycott, Divest and Sanctions (BDS) movement, which seeks to pressure Israel to comply with international law with respect to occupied Palestine and the blockaded Gaza Strip. As a consequence, news outlets that consistently report on the success of BDS, such as MintPress News, have been targeted on Wikipedia by such partisans, who recently succeeded in blacklisting MintPress as a “reliable source” on the online encyclopedia.

In early June, a small number of partisan Wikipedia editors privately voted to blacklist MintPress News from use as a source on the online encyclopedia website at the behest of a Wikipedia editor who took issue with MintPress’ coverage of current events in Venezuela and Syria. At no point was MintPress ever asked to comment or allowed to respond to any of the allegations made and MintPress is unable to appeal the decision.

Of the Wikipedia editors who voted to discredit MintPress, several were self-listed as experts in video games, computer science and anime, not geopolitical events, while others had previously gained notoriety for partisan promotion of pro-Israel perspectives and/or the U.S.-funded Venezuelan Popular Will political party, of which the U.S.-backed Venezuelan opposition leader Juan Guaidó is a member.