Benjamin Netanyahu’s playing the security card in an effort to stay in power. Six months as premier in a national unity government will be enough for him to annex a large swath of the West Bank… and become immune from prosecution.

The Jordan Valley, the eastern part of West Bank bordering Jordan, was targeted by Netanyahu in September ahead of Israel’s second general election this year. The embattled prime minister promised that, if he stays in power, he would annex the area as Israel’s sovereign land, because that’s what is needed for national security.

How big an impact his pledge made is not clear, but Netanyahu’s Likud party ended up almost tied with the Blue and White party of Benny Gantz. The outcome was just as inconclusive as the one from April’s election, and the two parties have since been struggling to form a government of national unity.

On Monday Netanyahu repeated his annexation pledge, saying he’d discussed the plan to formally incorporate the Jordan Valley with US President Donald Trump during an earlier phone call. He said Israel currently has a “historic opportunity” to move its eastern border towards Jordan and called on Gantz to work harder on a coalition agreement.

The Blue and White are fine with annexation, but it’s Netanyahu himself who stands in the way of the unity government. Gantz refused to join a government that would be headed by an indicted prime minister. Incidentally, on Monday Attorney General Avichai Mandelblit served to the Knesset a formal indictment of Netanyahu on charges of bribery, fraud and breach in three corruption cases.

According to Israel Hayom, a daily newspaper with strong ties to Likud, the party offered a deal that would keep Netanyahu in the prime minister’s chair for six months, after which he will cede it to Gantz, who in turn will vacate the office 18 months later to a nominee from Likud.

The half-year in power is, presumably, needed to enact the annexation of the Jordan Valley. Ze’ev Elkin, a leading Likud member involved in coalition negotiations,

The Israeli Knesset is considering legislation that would grant government officials immunity from criminal prosecution, and just so happen to spare Prime Minister Benjamin Netanyahu from three looming corruption indictments.

If the proposed amendment to the Immunity Law passes, elected officials could not be charged with a criminal offense unless the 120-member Knesset and the Knesset House Committee agreed to waive immunity. Should Netanyahu’s Likud Party secure a coalition and outnumber its rivals, the measure could effectively place them above the law for as long as they serve in government.

Also on rt.com
Israel finds location for a Golan Heights settlement to name after Trump – Netanyahu

The legislation reverses existing procedure by which Knesset members can only be granted immunity from prosecution if both the Knesset and House Committee agree to spare them. It applies to any offense committed during or before being voted into the Knesset, and has outraged opponents of the PM.

“Citizens aren’t allowed to steal, but MKs are,” MK Pnina Tamano-Shata from the opposition Blue and White bloc marveled at the opening of a Knesset House Committee meeting. The Blue and White plans to hold a protest on Saturday denouncing the move as a “defense shield for democracy.”

Even in Netanyahu’s own party, not everyone is convinced that making the Knesset above the law is a good idea. “This legislation offers zero benefit and maximum damage,” senior Likud party member Gideon Sa’ar told Israeli Channel 12, while former Likud MK Benny Begin remarked: “Such a phenomenon is called corruption.” 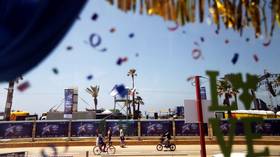 Likud MK Miki Zohar, who submitted the bill last month and was “delighted” to see it appear on the Knesset agenda on Monday, denied he was acting as an “emissary” of Netanyahu, who is currently facing a raft of serious charges including breach of trust, corruption, and bribery in relation to three cases.
Zohar, who is tapped to head the House Committee in the new government, insists Netanyahu had blocked the immunity bill when he introduced it in the last Knesset.