Accusations from Prof. Remco Breuker, Leiden University: the North Korea connection of delivering chemical substances to Syria, to make chemical weapons, and therefore, the Syrian government could kill its own people. For that reason, he claims they bombed Syria in 2018.

The United States, along with Britain and France, bombed Syria in April 2018, because of the alleged chemical attack in Douma, where 42 people lost they’re live. An illegal attack, nothing was proven that the Syrian government poisoned its own people. It was a “fake” attack, as many witnesses came forward and even traveled to the OPCW in Den Haag, the Netherlands.

Later it turned out, that all of it was invented by the so-called White Helmets, who were also responsible for setting-up the alleged chemical attack in Khan Sheikoun. Once Khan Sheikoun was liberated by the Syrian and Russian army, evidence was found, in the caves surrounding the city. Suits, chemical components were found, the chemical poison was mainly supplied by British companies.

A report by U.N. experts finds that North Korea supplied the Syrian government with materials that could have been used to produce chemical weapons on several occasions in the last two years, lending weight to long-standing suspicions that Syria is continuing to use these weapons on its own people.

The 200-page report, which remains unpublished but was reviewed by the New York Times, documents at least 40 previously unreported shipments from North Korea to Syria from 2012 to 2017, they claimed. No word about the British shipment of protective suits, the components for chemical poison delivered to the White Helmets in Khan Sheikoun. the White Helmets as we know we’re part of Al-Queada, Al-Nusra and DAESH.

A Dutch professor, specialized in North Korea, Prof. Remco Breukers, claims in his research that North Korea shipped chemical components from 2012 till 2017 to Syria, already under president Hafez-Al-Assad there were good relations between Syria and North Korea, what is wrong with that, you can ask yourself? Germany, the Netherlands, France, the US, and VK shipped many chemicals to Syria,

She made the statement after meeting with US Secretary of State Mike Pompeo and other diplomats in Palo Alto, California. “Our basic stance is that North Korea-US talks and inter-Korean dialogue complement each other in a virtuous cycle,” the minister said.

Kang added that, with US-North Korea talks in stalemate, it is essential to revive “North Korea’s engagement momentum” through inter-Korean talks.

The meeting came after South Korean President Moon Jae-in said inter-Korean cooperation could help ease the way for sanctions to be lifted on North Korea. However, it is unclear whether Pyongyang would welcome the proposed steps, Reuters said.

A US demand for South Korea to quintuple spending for hosting American troops earned a stiff rebuke from Seoul, to which Washington responded by walking out of “cost-sharing” talks to give Koreans time to “reconsider.”

Some of the US’ closest allies have bowed to pressure and agreed to pay more for the US-provided protection and deterrence, but the price tag is still an issue for Seoul. The US and South Korea found themselves at an impasse when the former demanded that Seoul spend $5 billion each year for hosting 28,500 American personnel on its soil. 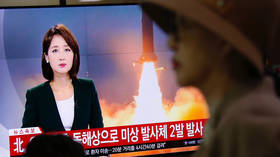 The sum would compensate US troops for their labor, support their families, and fund rotational troop deployment, along with offshore training expenses, according to Yonhap. Previously, Seoul was only asked to pay for its workers hired by US forces, construction activities at American bases, and other minor expenses.

$5 billion is actually five times bigger than one of East Asia’s biggest economies agreed to pay this year. Unsurprisingly, the cost-sharing meeting between American and South Korean negotiators abruptly ended one hour after starting, though it was scheduled to run throughout Tuesday.

South Korea’s chief negotiator Jeong Eun-bo confirmed Seoul and Washington are far apart on the issue, noting there is “a significant difference between the overall proposal from the United States and our position.” Seoul’s foreign ministry was a bit more articulate, signaling that Seoul is unwilling to pay more than it has done “over the last 28 years.”

There’s also a growing irritation at the pressure Washington is piling on Seoul. This Monday, the Korea Times, one of the most-read newspapers, run an angry editorial accusing the Trump administration of putting money before a desire to strengthen ties.

Coming a day after Seoul and Beijing agreed to “foster bilateral exchanges and cooperation in defense,” the piece warned that US-South Korea alliance may fall apart due to “Washington’s blatantly excessive demand for Seoul to cover the cost of the US military presence.”

In news that may stir fears of a Robocalypse among the faint-hearted, South Korea’s military unveiled plans to design robots that would mimic animals and humans. The ‘biorobots’ could be deployed in five years.

The DAPA said that it would galvanize efforts to design robots that would resemble humans and other living creatures, such as insects, birds, snakes, and possibly other marine life. For the moment, priority has been placed on developing human and insects-like robots. If the effort pays off, the know-how might be brought into the South Korean Army as early as 2024.

Also on rt.com
US Army will have more combat robots than human soldiers by 2025 – former British spy

The agency called the proposed biometric robots “a game change in future warfare” that will set the direction for the future of the defense industry.

Once “enrolled” in the army, humanoid and animaloid robots would be used for a variety of tasks, including rescue and search missions and reconnaissance.

That robots will one day replace humans on the battlefield or will make up the majority of the combat troops is no longer an idea from the world of science fiction, but a firm conviction of some security experts.

In 2016, the head of Russia’s military hi-tech body – analogous to the Defense Advanced Research Projects Agency (DARPA) in the US – said the notion of people fighting battles on the ground will soon be obsolete.

“Future warfare will involve operators and machines, not soldiers shooting at each other on the battlefield,” Andrey Grigoriev, head of the Advanced Research Foundation (ARF), said.

The push for replacing humans with advanced killer robots has stoked fears of imminent destruction of humanity.