German Chancellor Angela Merkel has turned the corner on relations with the United States. Her speech at the Munich Security Conference should be considered Germany’s divorce filing from the U.S.-led post-WWII institutional order.

It’s clear that to me now that Merkel’s priorities for what is left of her term in office are as follows:

Merkel will play both sides of the game for as long as she can but Trump and his merry band of Neocon psychotics are determined to stop Nordstream 2. They realize pipelines like these represent near permanent connections between Europe and Russia which the deadens Trump’s desire to maintain the empire through controlling the flow and price of energy.

For Trump there are three areas he is pushing Merkel. As I noted in my latest piece for Strategic Culture Foundation:

Trump’s pressuring Germany over the Nordstream 2 pipeline, withdrawing from the JCPOA and increasing NATO funding all have a common theme…

…Trump is trying to make Germany’s economy uncompetitive by raising the cost of imported energy.

… Ending US involvement in the JCPOA was meant to destroy the agreement and end all European investment in Iran’s energy sector, thereby stopping a steady flow of relatively cheap Iranian oil to Europe through its oil majors like Total (France) and Eni (Italy)…

[Increasing NATO funding] – Germany, in particular, would have to raise defense spending to such a degree that it would be unsustainable for them to maintain their current government funding in other areas.  » Lees verder

Authored by Martin Armstrong via ArmstrongEconomics.com,

The latest in Germany is now Merkel, who offered cash to refugees to return home last November, has stepped up her game and offered to pay their living expenses for one year if they return home.

Billboards are appearing all over Germany making this latest offer. Believe it or not, more than 20,000 refugees vanished when they were going to be deported. This illustrates that politicians should simply NOT be allowed to make unilateral decisions. In this case, Merkel’s decision has impacted ALL of Europe when the rest of Europe had NO opportunity to agree or vote on the issue.

Chancellor Merkel’ poll rating internationally collapsed after her refusal to yield to Greece in the debt crisis. She allowed the Greek people to be strip-mined of assets to pay for their corrupt politicians. When she was being criticized by the world press for her obstinance with regard to Greece, she did a 180-degree turn and changed the subject from Greece to Syria.

“Berlin’s role as the enforcer in negotiations over Greece’s debt could cause lasting damage to Germany’s global image.”

Merkel has kept her own poll people to make sure she turns and stays with the popular swings. When her image was tanking due to her policies in Greece, this is when, without a European vote, she flipped solely for her personal political career. The Washington Times wrote on September 10, 2015:

The entire refugee crisis was created by Merkel as a diversion because Germany was being viewed as the harsh enforcer of loans, which were structured to hide what Goldman Sachs had instituted to get Greece into the euro from the outset. The entire reason for the refugee crisis was simply the view of Merkel globally. She needed to reshape her image from the loan shark to the caring Mother Merkel.

Europe is now paying the price because Merkel was simply concerned about her polls.

“Mrs Merkel is in Greece to inspect the desert she made and to call it… recovery,” Varoufakis tweeted on Thursday. “Ironically, her Greek triumph unleashed deflationary forces that hit Germany (eg -ve interest rates) and wrecked her career. Never before has a German Chancellor wasted so much political capital.”

Mrs Merkel is in Greece to inspect the desert she made and to call it… recovery. Ironically, her Greek triumph unleashed deflationary forces that hit Germany (eg -ve interest rates) and wrecked her career. Never before has a German Chancellor wasted so much political capital.

Merkel’s visit to Greece is her first since 2014, and the first since left-wing Prime Minister Alexis Tsipras took office in 2015. Before arriving on Thursday, Merkel said that Greece can “continue to count on its partnership and friendship with Germany.” 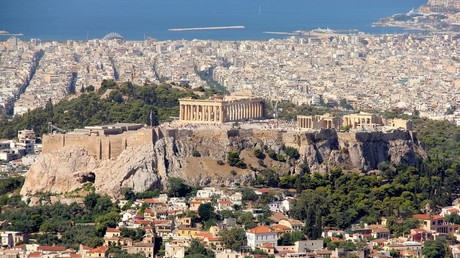 For many Greeks, the feeling is not mutual. With the country’s economy in tatters after the 2008 financial crisis, German-led austerity measures saw the country’s GDP shrink by a third, left one in three Greeks in danger of living in poverty, and saw unemployment rise to 18.6 percent – the highest in the Eurozone.

Meanwhile, German banks made €2.9 billion in profit from purchasing Greek government bonds through the European Central Bank. Greece exited the European assistance program last year, but will face another decade at least of austerity budgets and onerous economic reforms.

Merkel is expected to congratulate Tsipras’ government on exiting the bailout program, and urge his government to stay the course with the reforms when the pair meet on Thursday. The two leaders are also expected to discuss a deal between Greece and the Former Yugoslav Republic of Macedonia that would change the country’s name to the Republic of North Macedonia.

The issue of reparations for Greek victims of Nazi occupation may also be discussed, according to reports.

Authored by Federico Pieraccini via The Strategic Culture Foundation:

On December 19, Donald Trump announced in a Twitter message: “Our boys, our young women, our men, they’re all coming back and they’re coming back now. We won”. Shortly thereafter, Pentagon spokeswoman Dana White said in a statement: “We have started the process of returning US troops home from Syria as we transition to the next phase of the campaign”.

The reasons for Donald Trump’s move are many, but they are mainly driven by US domestic concerns. The temperature is heating up for Trump following the midterms, as the Democrats prepare to take command of the House of Representatives in January, something that Trump had always hoped to avert. He surrounded himself with generals, in the forlorn hope that this would somehow protect him. If the last two years of his presidency were constantly under the cloud of Mueller’s investigation, or insinuations of being an agent of Putin, from January 2019 the situation is going to get much more complicated. The Democratic electoral base is baying for the President’s impeachment, the party already in full pre-primary mode, with more than 20 candidates competing, with the incumbent of the White House offering the rallying cry.

The combination of these factors has forced Trump to change gears, considering that the military-industrial-intelligence-media-complex has always been ready to get rid of Trump, even in favor of a President Pence. The only option available for Trump in order to have a chance of reelection in 2020 is to undertake a self-promotion tour, a practice in which he has few peers, and which will involve him repeating his mantra of “Promises Made, Promises Kept”. He will list how he has fought against the fake-news media, suffered internal sabotage, as well as other efforts (from the Fed, the FBI, and Mueller himself) to hamper his efforts to “Make America Great Again”.

Trump has perhaps understood that in order to be re-elected, he must pursue a simple media strategy that will have a direct impact on his base. Withdrawing US troops from Syria, and partly from Afghanistan, serves this purpose. It is an easy way to win with his constituents, while it is a heavy blow to his fiercest critics in Washington who are against this decision.

German Chancellor Angela Merkel has said that European Union (EU) member states must be prepared to transfer powers over to Brussels at a debate on the ‘tensions’ between globalisation and national sovereignty.

“Nation states must today be prepared to give up their sovereignty,” Merkel said, speaking at an event organised by the Konrad Adenauer Foundation in Berlin on Wednesday.

“In an orderly fashion of course,” Merkel said, explaining that — while Germany had given up some of its sovereignty in order to join the EU, national parliaments were in charge of deciding whether to sign up to international treaties.

Trust and the willingness to compromise are vital in addressing tensions between sovereignty and globalisation, asserted the Christian Democratic Union (CDU) leader, highlighting the controversial UN migration pact, debate over which has continued to split her own party.

Merkel condemned the fact that, in discussions over whether Germany should join a fast-growing number of nations pulling out of the agreement, “there were [politicians] who believed that they could decide when these agreements are no longer valid because they are representing The People”.

“[But] the people are individuals who are living in a country, they are not a group who define themselves as the [German] people,” she stressed.

Earlier in the day, the Chancellor had previously accused critics of her plans to sign up to the Global Compact for Safe and Orderly Migration, which declares migration ‘inevitable, necessary and desirable’, of advocating “nationalism in its purest form”.

“That is not patriotism, because patriotism is when you include others in German interests and accept win-win situations,” insisted Merkel, paraphrasing her French counterpart Emmanuel Macron, who recently claimed that “patriotism is the exact opposite of nationalism [because] nationalism is treason”.

Battling disastrous poll ratings at home in France, as well as massive protests, Macron travelled to Berlin at the weekend, where he told the Bundestag that “the Franco-German couple [has] the obligation not to let the world slip into chaos and to guide it on the road to peace”.

Merkel has been the face of Europe – good, bad, or indifferent. Germany has been the major economy in Europe with France a distant second. We must understand that the fate of the Euro hinges on this position of Merkel. She has been a staunch supporter of austerity and the Green and AfD are rising BECAUSE of Merkel’s immigration policy. Instead of recognizing she may a major mistake and address it instantly, she has done the typical politician maneuver – blame everyone else and deny it was her policy at fault.

I cannot stress enough that the political instability within Europe, is a critical factor behind the capital flows that can push the dollar to unbelievable highs. Our unique capital flows analysis which we invented is backed by raw data which is contributed from proprietary sources worldwide which allow us to really see the trends without opinions or myopic domestic analysis. All of these people who keep talking about how the dollar has to crash are so caught up in old world theories that have NEVER been correct and have not just failed their analysis of things such as gold, but they have failed the central bankers on an even grander scale. This is why even central bankers attend the WEC. There is a much higher plane of financial analysis that we must respect and come to grips with BECAUSE we are all in this together. NO politician can even pretend to be in charge of the economy and make promises that are far beyond their control because NOBODY can go against the global trend. PLAIN & SIMPLE!!!!!!!

A special report is going out this week for the attendees of the WEC. This is on the Economic Confidence Model and the major November 2018 Convergence that is on our doorstep. The consolidation is about to end. So buckle up – we will be on our way to something really extraordinary that no domestic analysis will ever see coming.

In that respect, it will be like the 1987 Crash that was caused by external factors that never appeared in domestic numbers or analysis. It was so significant, that is when the Presidential Commission was compelled to request all our international research to understand how external factors overpower domestic.