The Centers for Disease Control and Prevention has added to the confusion about coronavirus, updating then deleting new guidelines about its spread that differ from the official position of the World Health Organization.

“It is possible that [Covid19] may spread through the droplets and airborne particles that are formed when a person who has [Covid-19] coughs, sneezes, sings, talks, or breathes. There is growing evidence that droplets and airborne particles can remain suspended in the air and be breathed in by others, and travel distances beyond 6 feet (for example, during choir practice, in restaurants, or in fitness classes). In general, indoor environments without good ventilation increase this risk,” the CDC said on its website on Friday, according to an archived copy.

The CDC’s original update flew below the radar over the weekend, drowned out by the news about Justice Ruth Bader Ginsburg’s passing and the ensuing political drama. On Sunday it was noticed and reported by CNN, while on Monday the Washington Post reported that the CDC seemed to be coming around to the position advocated by “independent experts” for months – that aerosol transmission of Covid-19 was a thing and that indoor ventilation was key to protecting against it. 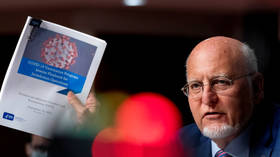 That was certainly news to the World Health Organization, whose official position – enforced with draconian glee by social media platforms – does not mention aerosol transmission, and sets the preferred social distance at three feet (0.9 meters) rather than the CDC’s six.

“Certainly we haven’t seen any new evidence and our position on this remains the same,” Mike Ryan, director of the WHO’s emergencies program, told reporters Monday at a press conference, adding he will be reaching out to the CDC for clarification.

Last week, the CDC publicly flip-flopped on testing guidance, abandoning its August recommendation that only people with symptoms, vulnerable persons and frontline workers should be getting tested.

The Federal Communications Commission (FCC) is not a health or environmental agency – HOWEVER – they are supposed to protect Americans by regulating the telecom industry.  Their history of NOT doing that started long before the Trump administration.  This has not gone unnoticed (see 1, 2, 3, 4, 5, 6, 7, 8) and lawsuits have been filed against them for NOT protecting Americans from unsafe levels of wireless radiation (see 1, 2) and promoting and forcing massive wireless deployment for insidious “Race to 5G” (see 1, 2, 3).

Yesterday, the FCC published its final rule in the Federal Register that it would NOT be updating its 24+ year-old wireless radiation exposure guidelines.

Thanks to Americans for Responsible Technology and 5GCrisis.com for creating a petition so everyone can take action against this.  CLICK HERE.

For many years, American Academy of Pediatrics and other health experts have warned that children are more vulnerable to all sources of wireless radiation exposure.  This includes Bluetooth, cell phone and WiFi radiation.  Despite this – there is still no “safe” level of exposure that has been scientifically determined for kids or pregnant women.  That’s why doctors, educators, and parents worldwide have been trying to have schools replace WiFi in schools with wired internet (see 1, 2, 3). The FCC doesn’t care about any of that though.  Last week one commissioner encouraged schools to provide WiFi Hot Spots to families so kids can learn in virtual classrooms during the coronavirus pandemic.  Insidious!

The Washington Post, which is wholly owned by a CIA contractor who is reportedly working to control the underlying infrastructure of the global economy, has published a shockingly deceitful smear piece about Democratic presidential candidate Tulsi Gabbard in the wake of her criticisms of her opponent Kamala Harris’ prosecutorial record during the last Democratic debate.

The article’s author, Josh Rogin, has been a cheerleader for US regime change interventionism in Syria since the very beginning of the conflict in that nation. It is unsurprising, then, that he reacted with orgasmic exuberance when Harris retaliated against Gabbard’s devastating attack by smearing the Hawaii congresswoman as an “Assad apologist”, since Gabbard has been arguably the most consistent and high-profile critic of Rogin’s pet war agenda. His article, titled “Tulsi Gabbard’s Syria record shows why she can’t be president”, is one of the most dishonest articles that I have ever read in a mainstream publication, and the fact that it made it through The Washington Post‘s editors is enough to fully discredit that outlet.

You can read Rogin’s smear piece without giving Jeff Bezos more money by clicking here for an archive. There’s so much dishonesty packed into this one that all I can do is go through it lie-by-lie until I either finish or get tired, so let’s begin:

“Gabbard asserts that the United States (not Assad) is responsible for the death and destruction in Syria, that the Russian airstrikes on civilians are to be praised“

This is just a complete, brazen, whole-cloth lie from Rogin. If you click the hyperlink he alleges supports his claim that Gabbard asserts “Russian airstrikes on civilians are to be praised,” you come to a 2015 tweet by the congresswoman which reads, “Bad enough US has not been bombing al-Qaeda/al-Nusra in Syria. But it’s mind-boggling that we protest Russia’s bombing of these terrorists.”

Bad enough US has not been bombing al-Qaeda/al-Nusra in Syria. But it’s mind-boggling that we protest Russia’s bombing of these terrorists.

Now, you can agree or disagree with Gabbard’s position that the US should be participating in airstrikes against al-Qaeda affiliates in Syria,

Shortly after the Trump admin enacted another $200BN in tariffs on Chinese imports just after midnight on Monday, China published a white paper to “clarify the facts about China-US economic and trade relations, demonstrate its stance on trade friction with the United States, and pursue reasonable solutions”, the Global Times reported.

Excluding the foreword, the massive, 36,000-Chinese-character white paper is comprised of six parts, which are

The white paper said the two countries are at different stages of development and have different economic systems, and therefore some level of trade friction is only natural. “The key, however, lies in how to enhance mutual trust, promote cooperation, and manage differences.”

The white paper said China and the US are at different stages of development and have different economic systems, and therefore some level of trade friction is only natural. “The key, however, lies in how to enhance mutual trust, promote cooperation, and manage differences.” https://t.co/YyGgSFcCS3

In the spirit of equality, rationality, and moving to meet each other halfway, the two countries have set up a number of communication and coordination mechanisms such as the Joint Commission on Commerce and Trade, the Strategic and Economic Dialogue, and the Comprehensive Economic Dialogue, the white paper said.

Each has made tremendous efforts over the past 40 years to overcome all kinds of obstacles and move economic and trade relations forward, which has served as the ballast and propeller of the overall bilateral relationship, according to the white paper.