The world’s first laboratory-grown presidential candidate Pete Buttigieg met with boos and chants of “Wall Street Pete” at a recent Democratic Party event in New Hampshire for taking a dig at the revolution-minded rhetoric favored by Bernie Sanders and his supporters.

“We cannot risk dividing Americans’ future further, saying that you must either be for a revolution or you must be for the status quo,” Buttigieg said. “Let’s make room for everybody in this movement.”

This is a talking point that the tightly scripted and focus group-tested Buttigieg has been repeatedly regurgitating all month, so it’s worth taking a look at.

Pete is just the latest model in a long line of CIA-funded counterrevolutions pic.twitter.com/PBAbIIzoxP

Anyone who has paid attention to US politics for more than a few years already knows that this is objectively false. From administration to administration, regardless of who sits in the Oval Office or who controls the House or the Senate, the status quo has been adamantly enforced along a rigid trajectory toward ever-increasing military expansionism, exploitative neoliberal economic policies, income and wealth inequality, police militarization, mass-scale imprisonment, Orwellian surveillance programs and increasing restrictions on journalism and free speech.

It is very appropriate that a military intelligence officer with ties to the CIA, who is beloved by intelligence/defense agency insiders and who appears to have been groomed by national security mandarins from the very beginning of his career,

The Washington-recognized interim government which just ascended to power via US-backed military coup in Bolivia is already shifting the nation’s foreign policy into alignment with the US-centralized empire, severing important ties with two governments which have resisted absorption into the imperial blob.

“Bolivia’s caretaker government isn’t wasting any time overhauling its foreign policy, announcing Friday that it will expel hundreds of Cuban officials and break ties with longtime ally Venezuela,” The Miami Herald reports. “In a series of statements, Bolivia’s new foreign minister, Karen Longaric, told local media that about 725 Cubans — including doctors and medical staff — would begin leaving Bolivia on Friday.”

“In that same interview she also said she’d be recalling Bolivia’s diplomatic staff from Venezuela,” Miami Herald adds. “Later, asked if she would maintain ties with Venezuelan leader Nicolás Maduro, she said, ‘Of course we’ll break diplomatic relations with the Maduro government.’”

Of course they will.

In more it’s-totally-not-a-coup news, the self-proclaimed “President” of Bolivia – after seizing power as the left-wing President was sent into exile & warning him he’d be arrested if he returned – cut off relations with Venezuela & expelled Cuban doctors https://t.co/ovXx0J57ai

This news comes as no surprise to anyone who’s been paying attention. US foreign policy is essentially an endless war on disobedience, in which governments that refuse to bow to US interests are toppled by any means necessary and replaced by governments who will.

International affairs are much easier to understand once you stop thinking in terms of separate, sovereign nations and start thinking in terms of alliances and empire. What we are witnessing can best be described as a slow-motion third world war between what amounts to an unofficial globe-spanning empire centralized around the United States and its military on one side, and all the nations which have refused to be absorbed into this empire on the other. Nations which allow themselves to be absorbed are rewarded with the carrot of military and economic alliance with the empire, and nations which refuse are punished with the stick of invasions, sanctions, trade wars, and coups,

The US is involved in regime change worldwide – from Venezuela in South America, to Ukraine in Eastern Europe, to Syria in the Middle East, to Afghanistan in Central Asia.

But these headline-grabbing wars, coups, color revolutions, and interventions are far from the full extend of US interference.

The US is also engaged in regime change efforts all along China’s peripheries. This includes across Southeast Asia and in particular, the nation of Thailand.

Hard Times for US Proxies

The military-linked Palang Pracharath Party (PPRP) won the popular vote and built a coalition with a majority in parliament. PPRP’s head, Prayuth Chan-O-Cha easily won a parliamentary vote for Thailand’s next prime minister.

Part of Shinawatra’s strategy during the last election was dividing his political party into multiple parties so that if one or two were disbanded, there would still be several others left to run for seats in parliament.

One of these parties is Future Forward (FFP) led by billionaire Thanathorn Juangroongruangkit. His party’s founding members include leaders and activists drawn from US and European-funded fronts posing as nongovernmental organizations (NGOs).

Since wading into politics, Thanathorn himself has received an inordinate amount of support from not only the Western media as seen during events organized by The Foreign Correspondents’ Club of Thailand (FCCT) but also from Western embassies based in Bangkok.

FFP faired poorly in the elections coming in distant third with several million fewer votes than PPRP. Despite coming in third, and despite Thanathorn claiming he was not Shinawatra’s proxy – Thaksin Shinawatra’s PTP nominated him as their candidate for prime minister, but fell far short of winning.

Thanathorn now has criminal cases mounting against him owed to serial violations of election laws as well as charges related to sedition. Perhaps in hopes of being overseas if a guilty verdict is reached and escaping jail – Thanathorn now finds himself “touring” the US and Europe asking – and receiving – support in Washington,

Check out this video of Macron at the biggest Zionist event of the year in France, the infamous “CRIF dinner”.  If you don’t now what the CRIF is, do not bother with the Wikipedia article – it’s all sanitized – but think of the French CRIF like (AIPAC+JINSA+ADL+B’nai B’rith)2: all the power of the Israel Lobby in the USA, but squared (yeah, I know, hard to imagine, but true).

Now check out this video: (FYI – the guy holding Macron’s wrist is the CRIF’s President)

The Essential Saker II: Civilizational Choices and Geopolitics / The Russian challenge to the hegemony of the AngloZionist Empire

The Essential Saker: from the trenches of the emerging multipolar world

As France braced for the 11th week of the Yellow Vest protests, President Emmanuel Macron said that he is not a ‘man of the elite’ as his critics claim. Yet, people told RT he can’t relate to the struggles of ordinary citizens.

In an apparent effort to brush aside the label ‘president of the rich’, President Macron decided to reaffirm that he is a ‘man of the people’.

“I’m not an heir,” the president said on Thursday. 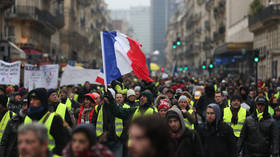 “If I had been born with a silver spoon in my mouth, or the son of a politician, you could have a go at me. But that’s not the case.”

He made the remarks in the town of Bourg-de-Peage during the third round of ‘national debates’, a series of town hall-like events the authorities hope will help to foster compromise with the Yellow Vest protesters and other critics of the government. Some, however, find it hard to buy Macron’s ‘I’m one of you’ message.

“He obviously doesn’t come from lower-income brackets like some of us do,” a woman told RT on the streets of Paris.

“He can’t understand the everyday problems of French people living on minimum wage,” another Parisian said.

“But it’s not really important what he says now. His future actions will define his presidency.”

Not exactly a man of humble upbringing, Macron comes from a well-off family. Prior to first joining the government as minister of economy and finance, he was an investment banker with Rothschild & Cie Banque.

“He studied in elite schools, as aristocrats do. He was ‘made’ there. The French elite is created this way,” a man told RT.

Even if the president is right about not being born into the elite, his milieu most certainly was, another said.

“Throughout his career Macron has networked with people who were born with silver spoons in their mouths. I think he is more a president for the rich. He is a ‘puppet’ of the big banks.”

In the eyes of his critics, Macron well deserves the ‘president of the rich’ tag after scrapping the wealth tax,

With Representative Tulsi Gabbard (D-Hawaii) entering the 2020 presidential fray, establishment figures on both Right and Left are scrambling to smear the anti-war congresswoman with impeccable identity-politics bona fides.

Ever since her 2017 visit to Syria, Gabbard has been condemned for daring to seek firsthand accounts rather than blindly trusting the MSM narrative, so on Friday the pundits were again off to the races, with fresh accusations of Assad-sympathizing.

Tulsi Gabbard’s disturbing and singular denialism of Assad’s role in the brutal butchering of his own people, obliging a meeting with him and spreading his propaganda should be disqualifying. pic.twitter.com/EI3UiEvLuu

Gabbard’s association with Hindu nationalists is odd, but her track record as an Assad apologist strikes me as being way more disturbing and likely disqualifying if she tried to run in 2020. https://t.co/bj4XoHvrEq by @shankarmya

“Assad apologist” seems to be the Tulsi equivalent of “Putin puppet,” judging from the early tweets, though she was accused of being one of those too.

My support for every other Democratic 2020 candidate still stands. But Tulsi Gabbard? Hell no. She should have been banned from the party a long time ago. Fucking monster. She’ll use her campaign to try to destroy the Democratic Party during the primary. I won’t allow it.

The funny part is, looking through all the tweets mentioning “Tulsi Gabbard” right now, the only ones saying positive things about her are Trump supporters and alt-right. Their deranged fantasy is that she turns the Democratic Party into a right wing puppet of the Kremlin.

Gabbard certainly poses a thorny problem for the neocon-neoliberal axis, as she checks all the identity politics boxes – the first Hindu member of Congress, a woman, a veteran – and she has undeniable populist appeal, given her anti-establishment record. While Gabbard is a Democrat, she was emphatically not a Clinton supporter, resigning as vice chair of the Democratic National Committee in February 2016 to endorse Bernie Sanders in the primary.

Authored by Caitlin Johnstone via Medium.com,

Yesterday the news broke that Swamp Monster-In-Chief John Bolton has been pushing President Trump to withdraw from the Intermediate-Range Nuclear Forces Treaty, the 1988 arms control agreement between the US and the Soviet Union eliminating all missiles of a specified range from the arsenals of the two nuclear superpowers. Today, Trump has announced that he will be doing exactly as Bolton instructed.

This would be the second missile treaty between the US and Russia that America has withdrawn from since it abandoned the Anti-Ballistic Missile Treaty in 2002. John Bolton, an actual psychopath who Trump hired as his National Security Advisor in April, ran point on that move as well back when he was part of the increasingly indistinguishable Bush administration.

This is why John Bolton shouldn’t be allowed anywhere near US foreign policy. This would undo decades of bipartisan arms control dating from Reagan. We shouldn’t do it. We should seek to fix any problems with this treaty and move forward. https://t.co/xj5FqyCyS6 #FoxNews

“This is why John Bolton shouldn’t be allowed anywhere near US foreign policy,” tweeted Senator Rand Paul in response to early forecasts of the official announcement.

“This would undo decades of bipartisan arms control dating from Reagan. We shouldn’t do it. We should seek to fix any problems with this treaty and move forward.”

“This is the most severe crisis in nuclear arms control since the 1980s,” Malcolm Chalmers, the deputy director general of the Royal United Services Institute, told The Guardian.

“If the INF treaty collapses, and with the New Start treaty on strategic arms due to expire in 2021, the world could be left without any limits on the nuclear arsenals of nuclear states for the first time since 1972.”