A British Supreme Court judge has slammed the UK government as ‘control freaks’ for attempting to control people’s lives under the guise of COVID, and labeled it “morally and constitutionally indefensible” to define what freedoms the public should and shouldn’t have.

In an op-ed published Sunday, Lord Sumption noted that the “debate about whether to let us have a family Christmas perfectly sums up what is wrong with this Government’s handling” of the crisis.

Sumption wrote that there are “many different answers to the dilemmas of a Covid Christmas”, yet the crux of the matter is “whether we should be allowed to make the choice for ourselves, instead of having it imposed on us by law.”

“But for the Jacobins of the Scientific Advisory Group for Emergencies (SAGE) and the control freaks in the Department of Health, theirs is the only answer,” Sumption urged.

The British government has posited allowing people to spend 5 days in the company of their relatives over Christmas, but with the caveat that in January they will have to pay back the privilege with more lockdown time, specifically another 25 days.

The technocrats may allow us to escape lockdown for a few days over Christmas.

How gracious of them! pic.twitter.com/g0tSKjohOV

Lord Sumption, who served as a senior judge on the Supreme Court of the UK between between 2012 and 2018, slammed the Prime Minister Boris Johnson, suggesting he is engaging in “public relations management” rather than leadership.

“Boris Johnson knows that restrictions over Christmas would be deeply unpopular, widely ignored and catastrophic for the retail and hospitality industries,” Sumption asserted.

“So he will soon announce their temporary suspension, behaving as if our lives belonged to the state and Christmas was an act of indulgence on his part,” the judge added.

I love to see the local pubs fighting back against lockdown lunacy. Bravo. pic.twitter.com/ZI1GJ23Cwp

Sumption further wrote that “control freaks and the rest of the sackcloth and ashes brigade will demand a payback” afterwards,

Authored by Jonathan Sumption, op-ed via The Guardian,

Suppose there is nothing that governments can do to stop the spread of Covid-19. What then? It is not a hypothetical question, as England is discovering. “We’ve got to be humble in the face of nature,” the prime minister observed in Saturday’s Downing Street press conference. But humility learns from experience, and there was no sign of that in the measures he then went on to announce.

In my opinion, the problem with lockdowns is that they are indiscriminate, ineffective in the long term, and carry social and economic costs that outweigh their likely benefits.

Lockdowns temporarily reduce infections and associated deaths. But they do so only by deferring them to the period after they are lifted. Members of the government’s Sage group pointed this out back in February. “Measures which are too effective,” they said, “merely push all transmission to the period after they are lifted, giving a delay but no substantial reduction in either peak incidence or overall attack rate.” In the meantime, these restrictions prolong the crisis, slow down the process by which the population acquires a measure of natural immunity, and cause immeasurable collateral damage. This is what we are experiencing now.

Lockdowns are indiscriminate because they do not distinguish between different categories of people whose vulnerabilities are very different. Some are young, some old. Some have had the disease and enjoy a measure of immunity while others do not. Some live alone and are starved of company, others have their families around them. Some live in rural Cornwall, where the reproduction rate is low, others in Liverpool, where it is high.

Allowing people to make their own judgments, tailored to their own circumstances and those of the people around them, is not only a more humane and rational response to the pandemic. It also directs resources to where they are actually needed. Instead, ministers treat the entire population as an undifferentiated mass. This one-size-fits-all approach is irrational.

The result is to inflict an appalling injustice on the young,

While critics of US President Donald Trump gloated over the Supreme Court ruling in the matter of his taxes, another verdict returning much of Oklahoma to the Creek Nation has far bigger implications for the country down the line.

“On the far end of the Trail of Tears was a promise,” Justice Neil Gorsuch – a Trump appointee presumed to be a conservative textualist – declared at the start of the majority opinion in McGirt v Oklahoma, referring to the removal of Native Americans that began in 1831.

Gorsuch sided with the four liberal justices in ruling that a large portion of Oklahoma was in fact “Indian country” for the purpose of criminal law. The 1866 treaty made with the Creek – now Muscogee – still applied, even if the state has exercised jurisdiction there for over a century, they said.

“Because Congress has not said otherwise, we hold the government to its word,” Gorsuch wrote.

Much as with Gorsuch’s previous liberal crossover – in last month’s Bostock v Clayton County, where he reinterpreted “sex” to mean gender and sexual orientation – the justice admitted the ruling could have far-reaching consequences, but said this could be addressed by legislation and in further cases.

Noting that among the costs might be serious conflicts over jurisdiction, Gorsuch wrote that “Oklahoma and its tribes have proven they can work successfully together as partners” over time, so he saw no reason for pessimism.

Conservatives who championed Gorsuch’s confirmation back in 2017 were appalled. Senator Ted Cruz (R-Texas) declared that Trump’s first justice “gave away half of Oklahoma, literally,” adding that “Manhattan is next.”

The Dutch who first settled the island that eventually became the heart of New York City said they had bought it from the Lenape tribe back in 1626. Their present-day descendants live in Oklahoma as the Delaware Nation.

NeverTrump critics reacted by gloating about Gorsuch’s “betrayal” of the president who nominated him, both in the Oklahoma case and in the matter of his tax returns – where he was joined by Trump’s other Supreme Court pick,

The conservative majority on the Supreme Court may betray America on cultural issues, but it does equally as impressive legal back flips to protect corporations who want to steal their worker’s pensions.

In Thole v. U.S. Bank, Judge Kavanaugh led a 5-4 ruling stating that the retirees suing their employers for enriching themselves by mismanaging their pension fund did not have standing for legal action due to the fact that they were still receiving money.

According to Kavanaugh, et al, stakeholders in a pension plan do not have a right to sue for fiduciary misconduct until their pension plan finally goes bankrupt. This is the equivalent of having someone steal and then gamble half the money you stored away for years– after taking excessive fees for themselves — and being unable to obtain legal redress because you still have enough leftover to pay your bills in the short term.

The ruling ignores and even neutralizes the rights of workers under existing laws like the Employee Retirement Income Security Act (ERISA), which is meant to curtail the irresponsible management and corrupt self-dealing by capital.

The case of U.S. Bank is egregious. From 2007 to 2010, the bank’s executives had their own subsidiary, FAF Affiliates, take a healthy and over funded pension plan and unilaterally decided to invest it all in the stock market rather than diversify it towards areas of stable growth. Over this three year period, $748 million dollars of the retiree’s money was lost to the Wall Street casino. The executives and speculators in question all compensated themselves with handsome fees for this blunder.

in his majority opinion, Kavanaugh made a painstaking effort to avoid addressing this gross misconduct. The plaintiffs, two retirees, demanded U.S. Bank — whose CEO Andrew Cecere gave himself a 40% salary increase last month — return the money to the pension plan. Kavanaugh threw the case out, arguing that individual pensioners have no say in how their pension plan is being handled until it is insolvent and they no longer are receiving their check.

Somehow the rules for managing pensions are different than those governing private trusts in the eyes of conservative jurors. This will provide huge leeway for corporate America.

The Supreme Court has declared prisoners have no constitutional right to a “painless death,” allowing the execution of a convicted murderer to go forward despite his protestations that lethal injection would cause him to suffer.

Reversing a 2018 decision, the court ruled that death-row prisoner Russell Bucklew’s constitutional protections from “cruel and unusual punishment” did not exempt him from pain and that he’d failed to present sufficient evidence that his preferred method of execution, the gas chamber, was less painful or that it could be “readily implemented.”

“The Eighth Amendment does not guarantee a prisoner a painless death,” Justice Neil Gorsuch wrote in the court’s majority opinion, “something that, of course, isn’t guaranteed to many people, including most victims of capital crimes.” The court was split along party lines, with five conservatives backing the ruling and four liberals dissenting. 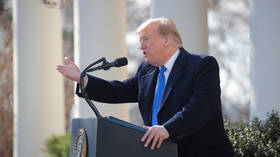 Bucklew sat on death row for 23 years filing one appeal after another, a fact Gorsuch mentioned in his opinion, which referenced the convicted killer “secur[ing] delay through lawsuit after lawsuit.” His latest appeal did not contest his guilt or even seek to avoid execution, but sought a stay over the constitutionality of execution by lethal injection of pentobarbital – which Bucklew’s lawyer argued would rupture tumors in the man’s face, neck, throat, and head caused by cavernous hemangioma, a rare medical condition, and therefore constitute cruel and unusual punishment under the Eighth Amendment.

Gorsuch and the other conservative justices were unduly “dismissive” in assuming Bucklew’s appeals were meant as a delaying tactic, Justice Sonia Sotomayor wrote in her dissenting opinion. While the court stayed his execution in 2018, two justices have retired since then and been replaced with Trump appointees Gorsuch and Brett Kavanaugh.

Bucklew was convicted of shooting and killing Michael Sanders, the live-in boyfriend of Bucklew’s ex-girlfriend Stephanie Ray, kidnapping and raping Ray, shooting at Sanders’ young son, and wounding a police officer – in 1996. By 2008, he had exhausted his appeals, as well as federal and state habeas corpus challenges. Since then, repeated lawsuits have kept him out of the execution chamber.