The narrative that domestic anti-government extremism is the greatest threat to U.S. national security — the official position of the U.S. security state and the Biden administration — received its most potent boost in October 2020, less than one month before the 2020 presidential election. That was when the F.B.I. and Michigan state officials announced the arrest of thirteen people on terrorism, conspiracy and weapons charges, with six of them accused of participating in a plot to kidnap Michigan’s Democratic Governor Gretchen Whitmer, who had been a particular target of criticism from President Trump for her advocacy for harsh COVID lockdown measures.

The headlines that followed were dramatic and fear-inducing: “F.B.I. Says Michigan Anti-Government Group Plotted to Kidnap Gov. Gretchen Whitmer,” announced The New York Times. That same night, ABC News began its broadcast this way: “Tonight, we take you into a hidden world, a place authorities say gave birth to a violent domestic terror plot in Michigan — foiled by the FBI.”

Democrats and liberal journalists instantly seized on this storyline to spin a pre-election theme that was as extreme as it was predictable. Gov. Whitmer herself blamed Trump, claiming that the plotters “heard the president’s words not as a rebuke but as a rallying cry — as a call to action.” Rep. Maxine Waters (D-CA) claimed that “the president is a deranged lunatic and he’s inspired white supremacists to violence, the latest of which was a plot to kidnap Gov. Whitmer,” adding: “these groups have attempted to KILL many of us in recent years. They are following Trump’s lead.” Vox’s paid television-watcher and video-manipulator, Aaron Rupar, drew this inference: “Trump hasn’t commended the FBI for breaking up Whitmer kidnapping/murder plot because as always he doesn’t want to denounce his base.” Michael Moore called for Trump’s arrest for having incited the kidnapping plot against Gov. Whitmer. One viral tweet from a popular Democratic Party activist similarly declared: “Trump should be arrested for this plot to kidnap Governor Whitmer. There’s no doubt he inspired this terrorism.”

New York Governor Andrew Cuomo instantly declared it to be a terrorist attack on America: “We must condemn and call out the cowardly plot against Governor Whitmer for what it is: Domestic terrorism.” MSNBC’s social media star Kyle Griffin cast it as a coup attempt: “The FBI thwarted what they described as a plot to violently overthrow the government and kidnap Michigan Gov.

Julian Assange is not on trial simply for his liberty and his life. He is fighting for the right of every journalist to do hard-hitting investigative journalism without fear of arrest and extradition to the United States. Assange faces 175 years in a US super-max prison on the basis of claims by Donald Trump’s administration that his exposure of US war crimes in Iraq and Afghanistan amounts to “espionage”.

The charges against Assange rewrite the meaning of “espionage” in unmistakably dangerous ways. Publishing evidence of state crimes, as Assange’s Wikileaks organisation has done, is covered by both free speech and public interest defences. Publishing evidence furnished by whistleblowers is at the heart of any journalism that aspires to hold power to account and in check. Whistleblowers typically emerge in reaction to parts of the executive turning rogue, when the state itself starts breaking its own laws. That is why journalism is protected in the US by the First Amendment. Jettison that and one can no longer claim to live in a free society.

Aware that journalists might understand this threat and rally in solidarity with Assange, US officials initially pretended that they were not seeking to prosecute the Wikileaks founder for journalism – in fact, they denied he was a journalist. That was why they preferred to charge him under the arcane, highly repressive Espionage Act of 1917. The goal was to isolate Assange and persuade other journalists that they would not share his fate.

Assange explained this US strategy way back in 2011, in a fascinating interview he gave to Australian journalist Mark Davis. (The relevant section occurs from minute 24 to 43.) This was when the Obama administration first began seeking a way to distinguish Assange from liberal media organisations, such as the New York Times and Guardian that had been working with him, so that only he would be charged with espionage.

Assange warned then that the New York Times and its editor Bill Keller had already set a terrible precedent on legitimising the administration’s redefinition of espionage by assuring the Justice Department – falsely, as it happens – that they had been simply passive recipients of Wikileaks’ documents. Assange noted (40.00 mins):

“If I am a conspirator to commit espionage,

When the history books are written about 2020 and the great coronavirus pandemic, Anders Tegnell, the humble Swedish state epidemiologist and architect of the global-consensus-defying ‘Sweden strategy’, will inevitably loom large throughout the text. But whether he is portrayed as a hero or villain may – like so many things in this highly polarized era – ultimately depend on who’s writing the piece.

As the FT explained in its latest in a series of interviews with Tegnell, the American press – thanks in large part to its newfound fanatical  devotion to the cause of “science” – including the NYT, has been particularly hard on Tegnell. The Gray Lady has called Sweden a “pariah state” and “the world’s cautionary tale.”

European papers have been somewhat more forgiving. That’s perhaps because the lockdowns imposed across Europe were far more restrictive than what most, outside NYC, experienced in the US. And despite all that work, new daily cases are back to seeing record highs in France, and post-lockdown highs in Spain, while cases climb in Italy, the UK, Germany and across Central Europe into Ukraine.

But sure enough, there’s one European nation where cases haven’t been showing a “second wave”: Sweden.

Instead, cases have continued to fall well into September.

There’s no denying that Sweden suffered a large tally of preventable deaths in nursing homes and other long-term care facilities early on the in the pandemic. But as more time has passed, Sweden’s outsize death toll is looking more and more reasonable, particularly compared to the UK and Spain and France.

But even when compared to its well-managed Nordic neighbors, Sweden’s numbers are starting to turn.

Here’s another view of the respective COVID-19 case data.

The data could offer some insight into why one Swedish CEO told an FT reporter in hushed tones that he would love to tag along on a meeting to meet Tegnell, who had reportedly been planning to spend 2020 helping Somalia set up a public health agency and sending out surveys to Swedes before COVID hit.

For many Swedes, their state epidemiologist has embodied a rational approach as other countries have appeared to sacrifice science to emotion.

While the Democrats’ record on arms control doesn’t look good at all, it’s no match for that of Donald Trump who is amplifying the risk of nuclear weapons being put to use, world-renowned intellectual Noam Chomsky opined on RT.

Chomsky, one of the most cited political thinkers of our time, made the remarkable point while speaking to RT’s Going Underground program. The US President “is racing towards maximizing the threat of nuclear weapons,” he proclaimed, invoking the Doomsday Clock which metaphorically measures time until a global disaster. 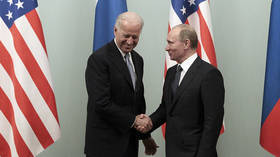 “That’s why the famous Doomsday Clock has been moved closer to midnight every year Trump has been in office,” Chomsky said to back up the claim. The Bulletin of Atomic Scientists, a group of scientists and academics managing the clock, has “abandoned minutes [and] moved to seconds – 100 seconds to midnight” this January, the intellectual said.

A vocal critic of US interventionism and historically not a fan of Trump, Chomsky insisted that the President – who isn’t shy of bragging about America’s nuclear deterrent – “has continued his attacks on arms control regime which has somewhat limited the enormous threat of nuclear destruction.”

Democrats don’t have a pretty record on this, I should say, but nothing like that.

Chomsky continued by listing the milestone treaties abandoned – or endangered – by the Trump administration. Among them was the 1987 US-Soviet Intermediate-Range Nuclear Forces (INF) which banned an entire class of weapons systems, as well as the 2002 Open Skies Treaty (OST) which allowed, as a trust-building measure, for unarmed surveillance flights over the entire territory of 35 participants.

While brushing aside existing restraints, Trump’s US is “moving towards creating new and far more threatening weapons of destruction against which there is no possible means of defense,” Chomsky said, apparently referring to the Pentagon’s latest technological advances in building hypersonic weapons.

The binding document, signed by then-Presidents Barack Obama and Dmitry Medvedev ten years ago, called for halving the number of strategic nuclear missile launchers in use by both sides and set limits for deployed nuclear warheads.

Hamdi was just an infant when his relatives first brought him to the Dadaab refugee camp in north-eastern Kenya to be registered as a refugee – despite the fact he was a Kenyan citizen. Like many ethnic Somali citizens of Kenya living in the vicinity of the camp, they were drawn to the prospect of obtaining food aid for their family.

Since the outbreak of the Somali civil war in the early 1990s, north-eastern Kenya has experienced periodic droughts, propelling many Kenyan Somalis to slip into the refugee system. At Dadaab, they could access free education, food and medical services that, as citizens of one of the country’s most neglected and marginalised regions, were often out of their reach.

Hamdi’s relatives did not anticipate that a seemingly harmless lie would hound him for almost half a decade. Over the last few years, tens of thousands of Kenyan citizens like Hamdi who have tried to obtain a Kenyan national ID have been turned away because their fingerprints are captured in the refugee database.

I met many of these people last December while conducting research in the town of Garissa in the eastern part of the country. This was part of an ongoing project into the troubled history of biometrics and identification in Kenya. I then returned to London to news of a newly published inquiry into the Windrush scandal. It detailed how hundreds of British Commonwealth citizens had been wrongly detained, deported and mistreated under the government’s harsh, data-driven immigration rules.

I was struck by the similarities between the UK and Kenya (two countries bound together by colonial history). The Windrush scandal, which came to public light in 2017, has attracted comparatively more attention than the plight faced by victims of double registration in Kenya. However, both cases reveal the harms caused by data-driven technologies in the service of anti-immigrant and exclusionary policies.

Migrant surveillance systems affect citizens and residents, particularly those who do not fit neatly into legal categories or typical ideas of who “belongs”. Civil rights activists have been raising alarms for years about the impacts of data-driven and biometric surveillance on irregular migrants.